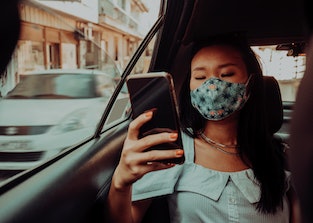 Uber's contribution to the Prop 22 campaign.

Uber and Lyft have been fighting hard against California’s proposed gig-worker protections for what feels like forever. Uber’s latest move: sending push notifications to its customer's smartphones to lobby them to its cause.

The pop-up notification, which was first spotted last week by The Los Angeles Times, appears when users open the Uber app to hail a ride in California. In large letters, it says: “If Prop 22 fails to pass, riders and drivers will be affected.” Users had to press a “Confirm” button in order to dismiss the notification, though that's now been changed to read "Continue to Ride."

It's a tasteless move by the ride-hailing company, but not a surprising one. And if it works, it could set an unpleasant precedent, not just for what's acceptable in apps, but for how labor law and the gig economy works in California and beyond.

Uber and Lyft — along with other gig-worker companies like DoorDash — have a lot to lose in this battle, so it’s no surprise they’re using every avenue at their disposal. They’d rather alienate some of their users than go down without a fight. The money at stake is simply too substantial.

The stakes are high — This battle goes back to late 2019 when California lawmakers introduced legislature called AB5 meant to afford gig workers some of the same protections as full-time workers in the state. The bill sought to convert hundreds of thousands of “contract workers” in California to full “employee” status, with the attendant benefits full-timers enjoy.

Uber, Lyft, and others that operate in the state would be forced to pay employees more and offer them benefits — things they’ve long been able to withhold from so-called contract workers. After months of in-fighting, Uber and Lyft threatened to pull out of California entirely rather than allow the law to pass.

A last-minute reprieve stopped the companies from ceasing operations but was always only ever going to be a temporary respite. Since then, alternative legislature known as Prop 22 has been added to California’s November ballots as a sort of middle ground between what California wants and what the companies want. Companies and interest groups have put more than $185 million into the campaign. Uber has contributed $3.5 million; Lyft has contributed $1 million.

Your stinginess is showing — Uber, Lyft, and other gig-worker companies have decided to fight tooth and nail rather than open their wallets for employees. Now they’re enlisting users’ help in a very direct way by using guilt-heavy messaging.

Uber’s pop-up notification includes a number of ultimatums meant to scare users into voting in favor of Prop 22. The consequences listed here, though, are all avoidable on Uber’s end. If drivers lose their incomes, that will be blood on Uber’s hands, not on the state of California’s.

The pop-up and Uber’s messaging generally makes it seem like there are only two options: pass Prop 22 or leave California entirely. There’s obviously a third option — pay workers a living wage and health insurance, even if that means increasing fares. That $3.5 million spent lobbying could've gone pretty far for Uber's workers.

Users don’t love it, of course — Uber and Lyft users have taken to social media to voice their opinions about the new notifications. They are, unsurprisingly, disappointed with the pushy marketing of Uber’s agenda.

Uber, for its part, says the confirm button wasn't meant to force users into supporting Prop 22, hence the change of wording. But the notification is pushy by definition and sees the company bringing its own political dilemmas into play in what ought to be a purely business transaction with customers.

Giving employees benefits would hurt Uber’s profit margins in the short run, sure, but it would actually increase the company’s sustainability in the long haul. People are much more likely to want to work for a company that appreciates its workers and is willing to compensate them fairly. But it seems Uber is too focused on its near-future profits — which are pretty bad already — rather than planning for the long-term or showing basic human kindness. If Uber can't pay living wages, that's not a sign there's something wrong with legislators, it's a sign the business model is broken.