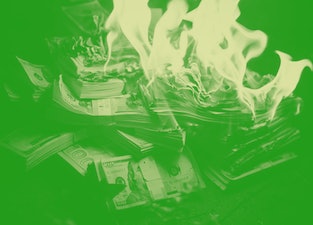 Uber sucks on so many levels, being a perfect encapsulation of everything wrong with craven, greed-driven venture capitalist startup culture. Yet, even being so obsessed with profit, it is apparently godawful at managing vast sums of money, all the while cruising right along (no pun intended) as if its decisions won't eventually catch up with the company. Case in point: the estimated $100 million Uber apparently straight-up squandered on incredibly obvious, third-party digital advertising scams... something that is garnering mainstream coverage in the first days of 2021, despite coming to light back in February of last damn year.

You Google Played yourself — Former Sleeping Giants alum and co-founder of Check My Ads, Nandini Jammi, caught most of us up on the whole situation yesterday in a lengthy Twitter thread detailing just how Uber, the poster child of startup capitalism's unethical robber baron mentality, managed to recently waste a mind-boggling $100 million in pointless digital advertising campaigns through a host of blatantly shady ad networks.

One such instance involved launching "'battery saver' style apps in Google Play, giving them root access to your phone." Upon typing "Uber" into Google Play, the service "auto-fires a click to make it look like you clicked on an Uber ad and attribute the install to themselves."

Meanwhile, no healthcare for Uber drivers — It's a comprehensive rundown worth reading in its entirety, but to make a long story short: after getting publicly roasted for continually advertising on Breitbart — Stephen Miller's racist, chauvinistic fever dream billing itself as a "news" outlet — Uber's former Head of Acquisition, Kevin Frisch, realized the company could trim roughly 3/4 of its entire online advertising budget and see next to no change in consumer engagement. No, seriously. Over $100 million that could have been reallocated towards such "costly" investments like sick leave, overtime, health insurance, or any number of the other bare minimum workforce benefits Uber routinely denies its gig employees.

Same as it ever was — In an era when pretty much every online company (including the vast majority of media outlets) believes the key to profits lies in costly, data-driven digital advertising plans, Uber's debacle should make many pause to reconsider their budgets. Instead, we're almost a year out from this news going public, and as far as we can tell, nothing has changed for most places. Maybe 2021 will be the year these digital ad myths can finally be put to rest, but we're not holding our breaths.