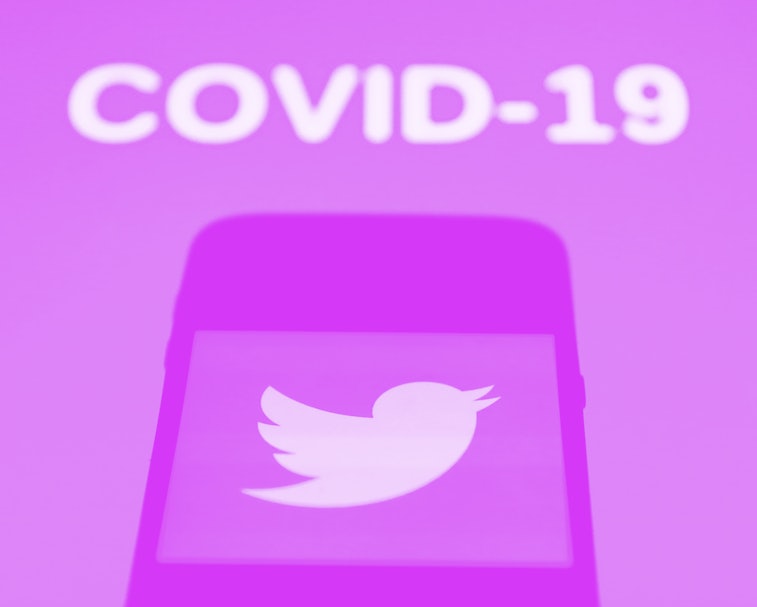 Twitter is dealing with a deluge of information — and, of course, misinformation — surrounding the novel coronavirus outbreak, and it wants the public to know its resources are being stretched thin. In a series of tweets yesterday, the company said that it's prioritizing the removal of only the worst, most dangerous tweets regarding COVID-19.

"As we communicated last week, COVID-19 is affecting our content moderation capacities in unique ways, and we’re adjusting to meet the challenge," the company wrote. "Right now, we’re focused on content that has the highest potential of directly causing physical harm." In other words, it's swamped and it's having to make difficult calls about what deserves priority... which is the same situation the U.S. healthcare system could soon find itself in.

Twitter says the content its moderation team is focused on in particular is anything that increases the chance someone will contract or transmit coronavirus. That includes tweets that, among other things, deny expert guidance, encourage people to use fake or ineffective treatments, or offer information purporting to come from experts or authorities in medicine when it's really not.

Human help required — The company has long relied on a combination of computer and human-based moderation to pull down tweets, but has basically said that coronavirus tweets are too nuanced for a computer to really understand.

"We want to be clear: while we work to ensure our systems are consistent, they can sometimes lack the context that our teams bring, and this may result in us making mistakes," the company said in a blog post. Due to the complexity of coronavirus-related content, Twitter says all such flagged tweets are reviewed by a human moderator before they can be taken down. Which is why the company has to prioritize some tweets over others.

A recent example — One recent example of Twitter enforcing its COVID-19 policies came last week when the company deleted tweets from former Milwaukee Sheriff David Clark Jr. that downplayed the severity of the coronavirus and called on local businesses to ignore ordinances aimed at slowing its spread. The company said the tweets were in violation of its newly-expanded rules against encouraging self-harm.

“It is now evident that this is an orchestrated attempt to destroy CAPITALISM,” Clark wrote in a since deleted tweet. “First sports, then schools and finally commercial businesses. Time to RISE UP and push back. Bars and restaurants should defy the order. Let people decide if they want to go out.”

Clark Jr. attacked Twitter for deleting his tweets, saying he would abandon the social network in response. For all of our sake's, let's hope he sticks to his guns on that one.