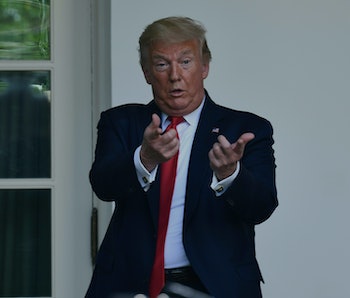 Twitter's misinformation labels have finally come for Donald Trump. Washington Post reporter Elizabeth Dwoskin spotted the labels on two tweets by the president on Tuesday. Trump’s tweets continue to push a narrative that mail-in ballots for the 2020 election open the process to voter fraud. The tweets appear to be on the lowest level of warning labels for misinformation and link to a page aggregating information from various news outlets disproving the claim.

Finally, consequences — Twitter is clearly starting to expand its coronavirus misinformation labels to other topics, as it promised when it rolled out the feature earlier this month. Based on Twitter’s label parameters, Trump’s tweets were found to contain moderately harmful disputed claims or misleading information. Despite this step in a more accountable direction, Twitter has yet to review Trump’s tweets that stoke conspiracy theories about a widower’s wife.

The moderation process for these tweets is still new and imperfect, especially outside of the public health scope for which it was intended. Trump's account alone provides a treasure trove of political misinformation to go through.

Trump's response — Trump, made aware of the warning labels affixed to his tweets, took to Twitter to accuse the company of infringing on free speech. He also took the opportunity to double down on the inaccurate information that got him in trouble in the first place.

Part of a broader effort — Twitter has been scrambling over the past few months to crack down on the misleading information that runs rampant on its platform. Before tightening its grip on content relating to COVID-19, the company in March began labeling posts that contain deepfakes or otherwise manipulated media.

"These labels will link to a Twitter-curated page or external trusted source containing additional information on the claims made within the Tweet,' the company explained in a recent blog post. "Depending on the propensity for harm and type of misleading information, warnings may also be applied to a Tweet." Twitter now seems to be giving this treatment to other sources of misinformation, too — including the president.

Update: This piece was updated to include Trump's response to his tweets getting flagged as misinformation.