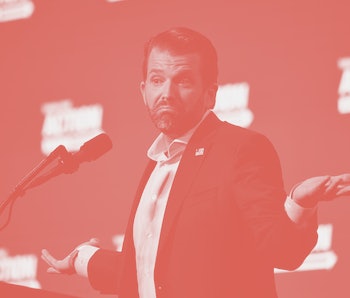 The video in question showed a staged press conference where several "doctors" spoke about the supposed efficacy of hydroxychloroquine in treating the coronavirus. Those in the video also spoke at length about face coverings being unnecessary in curbing the spread of the virus.

Twitter says that, as per its misinformation policies, Trump Jr. will need to delete the tweet in order for the company to fully restore his account. (UPDATE 11:00 A.M. ET: The tweet in question has been deleted.)

What about the others? — Despite the insistence by conservative voices that this is an issue of free speech, Twitter is simply taking the action required by its COVID-19 misinformation policies. And, in fact, Twitter would be doing a disservice to its users by ignoring Trump Jr.'s misinformation-peddling. The claims made in that video aren't just false — they're mortally dangerous.

We have to wonder whether or not other accounts that posted the video will face similar action from Twitter. President Trump shared multiple versions of the video himself, but his account has not yet been suspended. In fact, he's still tweeting out misinformation about pharmacological companies this morning.

Twitter has taken explicit action against the President's tweets in the past, most notably for inciting violence during the riots following George Floyd's murder. The company has neither suspended nor banned Trump from the platform, though it has taken those actions against accounts that tweet the same things he does. The President has been banned or removed from other social networking platforms, such as streaming service Twitch and the Snap Discover page, for similar violations.

So, Twitter, we'll be waiting on the same action to be taken against President Trump and others who have shared this dangerous misinformation. Or are you too afraid of his wrath to enforce your own guidelines?