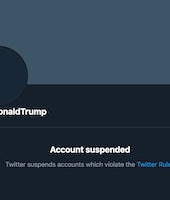 For years, many suspected that Twitter viewed Donald Trump and all his toxic fallout as an asset for growing site traffic and ad revenue. It became increasingly difficult — some would argue impossible — to justify keeping his account active in spite of his countless examples of harassment, misinformation, and incitements of violence. Those suspicions were all the more reinforced after Twitter founder and CEO, Jack Dorsey, finally got around to banning the Asshat-in-Chief following his role in spurring January 6’s deadly Capitol Hill riots, only days before Trump was set to abdicate his golden throne.

According to the company’s newest financial reports, however, it sounds like Twitter could easily have held Trump accountable whenever it wanted to without risking too much money. As the New York Times explained yesterday, Twitter generated around $1.08 billion in revenue from its first quarter in 2021, an estimated 28 percent increase from the same time last year with a net income of $68 million. While the pandemic definitely played a roll in the uptick, it’s also worth noting it was Twitter’s first economic quarter almost entirely sans @realDonaldTrump, so it’s clear most are totally fine with the orange-tinted ghoul not having an easy means to spout bullshit from his bathroom in Mar-a-Lago.

Getting in on the cryptocurrency craze — Alongside more people logging onto Twitter during the pandemic, the NYT explains that the company has better adapted to seizing on current trends for ad profits. In recent months, the social media platform was more than happy to take cryptocurrency-related advertisers’ money as everyone hopped on the Bitcoin (sigh... and Dogecoin) bandwagon, with Dorsey going so far as to publicly back the former himself.

We’ll see how this looks in the long run — Despite the impressive numbers, Twitter’s stock prices took an after-hours trading 8-percent dip following the announcement, as Dorsey cautioned that the coming months almost certainly won’t match the past year’s increase in traffic as life returns to at least some sense of pre-pandemic normalcy. While we certainly aren’t cheering on Twitter’s financial success (it’s still a wasteland, no doubt about it), it is always nice to see news that will thoroughly upset Trump. Of course, it’s only a matter of time before he weighs in on this latest slap in spray-tanned jowls... but it certainly won’t be on Twitter.