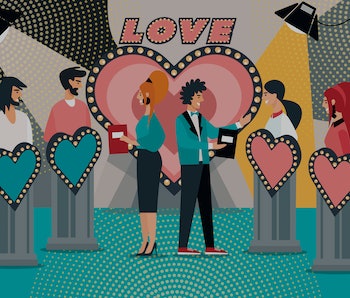 Amazon-owned Twitch, the world’s most popular game-streaming site, is looking to expand into talk shows and dating programs for gamers, Bloomberg reports. The company is planning a full slate of live, interactive series that would air two to three times per week, according to internal documents seen by Bloomberg.

Expansion into original content is a huge move for the streaming network and a first. This is the perfect time for it, though — Twitch has seen its business booming since the beginning of the COVID-19 pandemic, with over 1.2 billion hours of content streamed last month alone. It's also been testing letting users watch Prime Video content together, and it's launched a directory of its esports content so users know when to tune in. Adding dating shows to the mix is a bold one, but one that could pay off. Traditional dating services like Tinder are struggling in light of stay-at-home orders and are looking at adding video to combat this.

Amazon is taking a sizable risk by putting resources into original content. But given how popular Twitch has been lately, that risk could pay off big time. And Twitch isn't alone. It emerged this week that music-streaming service Spotify is dipping its toes in the video market, too. Meanwhile, both Facebook and YouTube are eager to chip away at Twitch's dominance, so adding new features to the service and keeping users on it is key.

How much content are we talking about? — This is all still very preliminary and based on one document, so it’s difficult to say how many original shows Twitch will actually end up making. The document says Twitch is planning to spend anywhere between $50,000 and $250,000 per week on these series. The shows would total somewhere between four and six hours of original programming each week.

Pushing the limits — Twitch moving into the original content market would be pretty monumental for both the company and the streaming market at large. There’s plenty of streaming media out there, and plenty of reality TV shows, but interactive, live media — well, that’s a different story. It’s relatively uncharted territory.

Twitch’s audience is also unique here. The company has managed to attract enormous numbers of very specific people: gamers. That captive audience will give the company a head start in viewership when new content airs.

A very specific market — Based on the internal document in question, Twitch is looking to capitalize on this audience by looking for shows in two particular demographics: male gaming enthusiasts between the ages of 18 and 24, and anyone between 18 and 24 who's interested in general entertainment.

If Amazon works up this interactive content quickly enough, it would be perfect timing to capitalize on quarantine boredom. And who knows, maybe Twitch will even help some gamers find real-world love in this weird time.