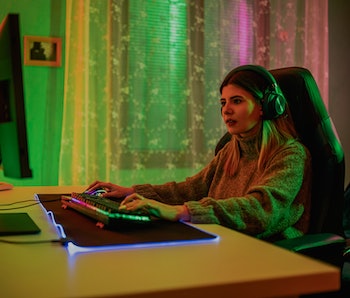 Much of the time it’s easy to forget that Twitch is owned by Amazon, though every once in a while the streaming company makes a decision so strange that its parent company is instantly called to mind. Here’s an easy example: Twitch user names are no longer allowed to include references to drugs or sex. Apparently this change is meant to “make Twitch the kind of place where everybody feels at home.”

These new rules are in addition to Twitch’s existing username policy, which doesn’t allow for mentions of harassment, violence, glorification of tragedy, self-destructive behavior — the list is lengthy. In all but the most serious cases, Twitch will just make you change your username.

Tiered enforcement — If there’s any good news here, it’s that Twitch isn’t exactly going to run around banning people who already have sex references in their usernames. You’re safe for now, autofellatio777.

Twitch says it will instead use a “tiered enforcement” scheme to clean its platform of offensive usernames. References to hard drugs or sexual conduct will force a “username reset,” which basically just means you won’t be able to access your Twitch account until you’ve renamed your account. Users that fall into this category will receive an email notification.

The new enforcement strategy will go into effect on March 1. All subscriber and content history should migrate to your new username with no problems. Anyone looking to create a Twitch account after this date will have to go head-to-head with the company’s machine learning algorithms if they want their Twitch personality to be based around sex or drugs.

The urge to be family-friendly — Twitch is trying very hard to be “inclusive.” So hard you’re no longer allowed to reference sex in your username — despite the vast majority of Twitch users being between the ages of 20 and 39.

This mission is admirable enough. But forcing people to change their usernames comes off as more performative than anything else when placed in context of Twitch’s more pressing inclusivity problems. Helping your lesbian gaming streamers not be harassed might be a more meaningful place to start, for example. Or, you know, generally providing better protections for marginalized streamers.

The new username restrictions will surely make some parents happy, allowing them to feel less guilty about letting their teenagers watch Twitch streams all day. For those who are actually struggling to feel Twitch’s supposed inclusivity though… maybe not so much.