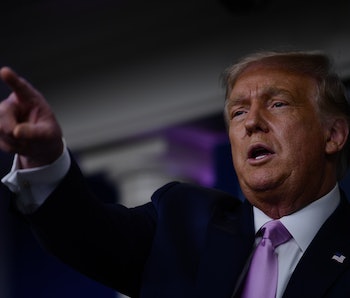 President Trump is planning to go a few steps beyond simply banning the use of TikTok in the United States. Documents seen by Reuters reveal that the Trump administration is looking to fully disrupt TikTok’s worldwide business by prohibiting U.S. businesses from advertising on the app or including it in their app stores.

“Prohibited transactions may include, for example, agreements to make the TikTok app available on app stores…” the documents read, “purchasing advertising on TikTok, and accepting terms of service to download the TikTok app onto a user device.”

Though the White House has not made any official mention of these proposed rules yet, a source familiar with the document verified its authenticity. TikTok, Apple, and Google have not yet commented on the matter.

The Trump administration has stated many times over that its concerns with TikTok are ones of national security. In these leaked documents, it’s made clear that the administration’s vendetta against the company goes far beyond its privacy practices.

The implications here are far-reaching — Apparently banning a popular social networking app with no evidence wasn’t enough for the Trump administration. Now it’s attempting to destroy the business in its entirety. Doing so would have consequences for other major companies in the U.S. and beyond.

Though the leaked documents don’t mention Tencent explicitly, it’s likely the administration’s extended rules would cover that Chinese company, too, in accordance with the executive order Trump signed last week. Along with plenty of other properties, Tencent owns WeChat, an extremely popular Chinese messaging platform with more than 1.2 billion active users.

If the Trump administration forces Apple and Google to remove WeChat from their respective app stores, WeChat users would likely buy from a different phone brand — one not based in the U.S. and, therefore, not subject to its rules — instead of one that uses software from either Apple or Google. This could result in a decline in annual global iPhone shipments of up to 25 to 30 percent, according to noted Apple analyst Ming-Chi Kuo.

Will a sale cure these woes? — Right now both Tencent and TikTok are stuck in a legal pickle. The U.S. is a lynchpin in both companies’ profits, and losing the country as an operation point would likely ruin them.

The only hope right now — for TikTok, at least — comes in the form of a sale to a U.S.-based corporation. Trump’s executive order says TikTok will only be banned if the company’s U.S. operations aren’t sold by September 20. Microsoft has publicly expressed interest in buying TikTok, though it’s employees aren’t quite so happy about the potential deal.

Tencent’s future is even murkier than TikTok’s. Trump’s executive order attacks Tencent with broad strokes that would be very difficult to enforce, given the many, many hands the company has in different industries.

Whether or not the Trump administration attempts to turn these leaked documents into law, to do so would undoubtedly be an abuse of power — one that will affect the worldwide tech economy far outside just TikTok and Tencent.