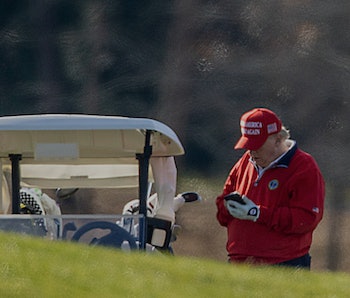 In a series of tweets (where else?) last night, President Trump renewed his war against social media companies with an ultimatum for Congress: throw out Section 230 or lose out on a national defense budget. It’s the most escalation we’ve seen on this front in a while, though it’s unclear just how seriously it will be taken by lawmakers.

“Section 230, which is a liability shielding gift from the U.S. to “Big Tech” (the only companies in America that have it - corporate welfare!), is a serious threat to our National Security & Election Integrity,” Trump tweeted just before 10 p.m. Tuesday. “Therefore, if the very dangerous & unfair Section 230 is not completely terminated as part of the National Defense Authorization Act (NDAA), I will be forced to unequivocally VETO the Bill when sent to the very beautiful Resolute desk. Take back America NOW. Thank you!”

Trump’s concerns about Section 230, once limited to the supposed silencing of conservative voices on social media, have been compounded in the last month by the chaos surrounding the 2020 Presidential Election. Trump’s continued misinformation campaign around the election results has sent social media companies into a 24/7 frenzy.

Lawmakers are very close to finalizing a $740.5 billion budget for national security, which includes military funding and other defense decisions. Trump is attempting to leverage his approval of that bill with the continued use of Section 230 — a bargain that makes sense neither on paper nor in practice.

One long tantrum — This conflict boils down to a very simple argument: Trump and his allies believe they should be allowed to use the internet to promote whatever they want, dangerous lies, misinformation, and conspiracy theories included. They believe that, as Americans, they are entitled to “free speech” — even when that speech has the potential to cause lasting harm.

Trump’s war against Section 230 feels as if it’s been ongoing for a decade; really it only dates back to May, at least in its current form. After being hit with one of Twitter’s misinformation labels for the first time, Trump vowed to “close down” social media. He soon issued an executive order meant as payback — which did little besides rile up his fan base.

Since May, Trump and his supporters have continued to tweet dangerous misinformation with reckless abandon. Twitter and Facebook have both done their due diligence in labeling — and, in extenuating circumstances, removing — this content. And thus Trump’s war continues.

Reform is coming — If there is any truth to be found in Trump’s elongated tantrum, it’s that Section 230 is outdated. The Communications Decency Act — which Section 230 is just one small part of — was enacted in 1996. The internet has evolved a thousand times over in the last 24 hours, never mind the last 24 years.

It isn’t just Republicans who have acknowledged this point; lawmakers all across the political spectrum recognize Section 230 is in sore need of reform. Their reasons for pushing reform are often at odds — but both sides agree the internet has long outgrown the little policy currently in place for it.

Section 230’s reform could play out in a myriad of ways, none of which will come to fruition overnight. So Trump’s threat is just that: a threat. The tantrum shows no signs of slowing down.