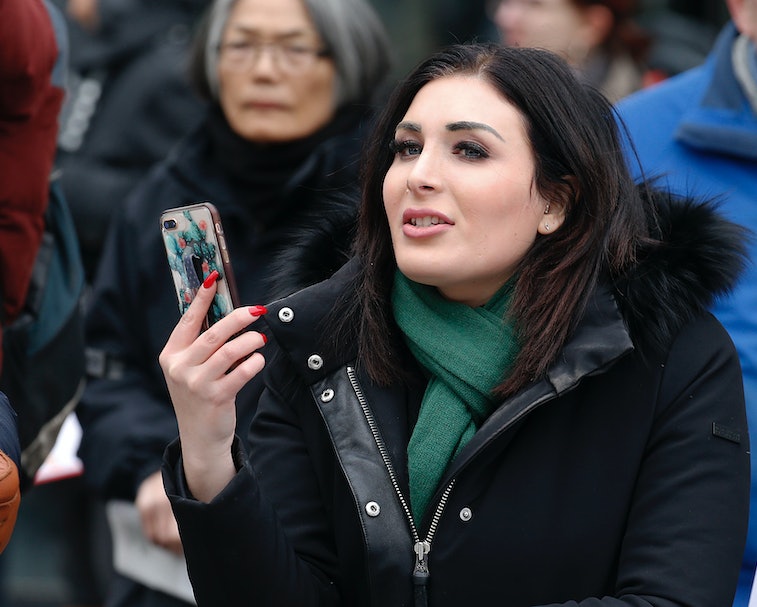 Rightwing extremist and self-owning internet troll, Laura Loomer, won the GOP’s primary election for Florida’s 21st District House seat last night, an area that encompasses Trump’s Mar-a-Lago Resort. This earned a brief Twitter shoutout from Max Headroom stand-in and racist, Rep. Matt Gaetz, along with the President, who was probably only paying attention in the first place because that particular election might influence his property taxes.

The congratulations are particularly ironic, given that Loomer is perhaps best “known” by anyone outside the internet for handcuffing herself to one the doors of Twitter’s NYC headquarters after they banned her for hate speech. Loomer, who’s Jewish, wore a yellow Star of David pinned to her shirt in reference to her being persecuted like Jews during the Holocaust. It’s still not fully clear to this author, who is also Jewish, how Twitter banning someone for violating its policies and the death of six million by a genocidal regime are equivalent.

Banned from more than a dozen apps — Twitter isn’t the only place that’s banned Loomer for life from using its services. The self-described “proud Islamophobe” has tallied up more than a dozen expulsions from various platforms including, but not limited to, Uber, Uber Eats, PayPal, Instagram, and even custom merch retailer, TeeSpring.

Loomer has always been a rightwing gadfly to the gadflies, and despite what others might say, her win isn’t really all that surprising. After all, this is a major American political party now regularly allowing all manner of racists, bigots, antisemites, and QAnon conspiracy theorists within their ranks, so what’s one more fame-hungry hatemonger? Loomer faces a steep uphill battle against her Democratic challenger, Rep. Lois Frankel, and while the last four years have removed any shadow of a doubt that anything is possible in politics right now, it’s unlikely she’ll usurp a locally popular career politician.

A looming problem in politics— The worst part of this all is now that she’s technically a major party’s candidate for office, major social media platforms will likely face renewed pressure by Trumpist minions and other backstrokers in the internet cesspool to reinstate at least some of her access to their services. Might we recommend Gab? A site that, Christian-leanings aside, seems like an ideal fit for Loomer's brand of fiction-based opprobrium.

Whether or not social networks will acquiesce to the demands remains to be seen. We're using our thoughts and prayers to encourage them not to. While companies like Twitter and Facebook are slowly moving to curb demonstrably dangerous and factually inaccurate misinformation spreading, that kind of site traffic is built into their profit models. You can be sure that plenty more Loomers are looming online, ready to capitalize if the mainstream social networks capitulate.