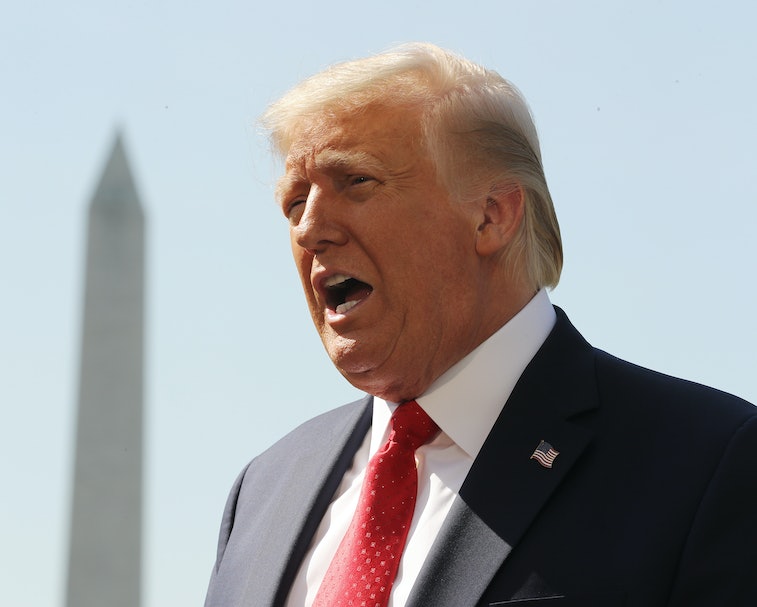 While President Trump continues to push for a ban of Chinese-owned TikTok, he's now lending support to its competitor Triller. His official profile went up on the app last week. One of his first Trillers (?) features shots from campaign rallies with a soundbite of the president saying, "I'm a professional at technology." It's yet to be seen whether his Twitter skills will translate to the short-form video format.

Tough break — Unfortunately for Trump, the very reason he pushed for the ban of TikTok in the first place is coming back to haunt him on Triller: bullying. Teens on TikTok famously banded together to troll the president by RSVPing en masse for one of his rallies that they had no intention of attending, giving Trump the impression many more people would show up to his Tulsa, Oklahoma rally than did. Now on Triller, many of the comments under his first videos are from users telling him to go away.

Petty retribution — Although Trump has cited national security concerns for pushing a TikTok ban, some have speculated his motives are simpler than that. TikTok skews heavily towards the teenage demographic with the videos mostly being light-hearted in nature. There's not exactly a lot of data being collected that other social media apps aren't also gathering.

But TikTok is owned by China-based ByteDance. As one of the first social media apps owned by a Chinese company to find popularity around the world, attacking TikTok could please his older supporter base that's hawkish on China and doesn't really understand TikTok anyway. And he could get back at those darn kids who ruined his rally.

Wolves at the door — If you don't believe Trump is that strategically sophisticated, other tech companies that envy TikTok's popularity have been subtly supporting a ban, exploiting fears of Chinese surveillance to promote their own alternatives. Instagram notably launched a TikTok clone called Reels that looks practically identical. Facebook CEO Mark Zuckerberg has argued that only American companies like his can be trusted because Facebook is American, and therefore its mass data collection is okay while TikTok's apparently isn't. Every faction seems to have some ulterior motives in beating up on TikTok.

Smacks of conspiracy — Being that TikTok is owned by a Chinese company, it certainly could be compelled to hand over user data to Chinese officials. The company has denied doing so and says that it wouldn't. The Committee on Foreign Investment in the United States (CFIUS) has been investigating security concerns regarding the app, but the absence of any ruling lends credence to the idea that Trump's move is less grounded in genuine concern.

Critics say that if Trump was genuinely concerned about Chinese surveillance, he could more effectively address it by passing federal privacy legislation and by scrutinizing internet hardware that's built in China and could include security holes. Specifically banning an app from a Chinese company could hurt the U.S. if that country chooses to retaliate in some way, such as by forcing Apple to move manufacturing elsewhere. Also, imagine if the situation was reversed and China insisted Microsoft sell it's Chinese business to ByteDance to continue operating there?

Besides Facebook and Triller, another player called Byte also stands to potentially benefit from a ban of TikTok. That app is functionally similar to TikTok and was created by a co-founder of the now-defunct Vine, which was truly the first iteration of the short-form video idea before Twitter let it whither and TikTok took hold. As for Triller? This ruckus was the first time we'd heard of it. But then, there was a time we'd never heard of TikTok, so we wouldn't be so presumptuous as to count it out just yet.