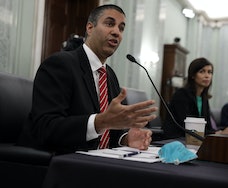 The United States’ 5G rollout has been anything but smooth thus far, plagued by spotty-at-best connectivity rates and President Trump’s ongoing, internecine war against Huawei. Now the government has announced a fresh plan to bring the next-gen internet connection to every nook and cranny of the country — and it includes some surprisingly relaxed new wireless spectrum policies that don't resemble the sort of behavior we'd usually expect from such a vocal fan of free-market economics.

The Trump administration revealed on Monday its intentions to share the 100-megahertz mid-band spectrum — a huge chunk of wireless coverage previously reserved for military use — with the wireless industry beginning in mid-2022. The hope is that this extra bandwidth will increase the country’s ability to make 5G connectivity more of a reality.

“Our great innovators and entrepreneurs will continue will continue to push the boundaries of this nascent technology,” said Michael Krastios, the country’s chief technology officer.

This move is fairly monumental; the military’s reserved spectrum is wide and will, indeed, free up a lot of air space for the U.S.’s 5G rollout. It’s also an obvious grab at tech supremacy over the likes of China, which is rapidly becoming one of the Trump administration’s most major preoccupations.

What’s the big deal about 5G, anyway? — Chances are you’ve at least heard of 5G at this point. Every major cell service company is attempting to tout it as a feature of their coverage, even though true 5G connectivity is still sparse at best. 5G is the next generation of wireless internet coverage, promising download speeds of up to a gigabit per second and extremely low latency, which is essential for services like cloud-based gaming services.

The promise of that degree of connectivity is being hyped up as pivotal to the future of tech innovation. Apple has even gone as far as delaying its next iPhone release to allow the device to support 5G.

We’ve been struggling to make it a reality — But that kind of speed and overall device capacity requires massive amounts of new equipment and bandwidth. Access to 5G has long been more of a pipe dream than a reality, and Trump’s decision last year to cut all ties with Huawei — up to and including the removal of existing cell service infrastructure made by the Chinese company — has made the battle for 5G rollout in the U.S. an uphill one.

The White House's decision to share the mid-band air space it’s long reserved for military use should hopefully increase the range of 5G connections, which should then mean less new tech needs to be deployed to make those connections work reliably.

As usual, it’s about China — The Trump administration’s decision to open up this mid-band frequency range is by no means altruistic. The U.S. is very worried about China’s fast-growing tech supremacy, which has led to widespread bans on Chinese-made devices in the U.S. It’s also created a culture of fear around using popular applications created in China, like TikTok and Zoom.

“[The administration] is taking decisive action to secure our domestic networks from foreign espionage,” said Krastios of Monday’s announcement. The hope is, of course, that a faster, more complete 5G rollout will lead to quicker tech innovation in the U.S., thereby giving the country a leg up over China.

Political intentions aside, the increased mid-band bandwidth will be very helpful in making 5G coverage a reality. It just might take a few more years until you can take advantage of its benefits across the entire country. But shhh, don't tell the capitalists running the cell networks that taking spectrum from one party and giving it to business looks a whole lot like socialism. Because that's not important when the President has an axe to grind.