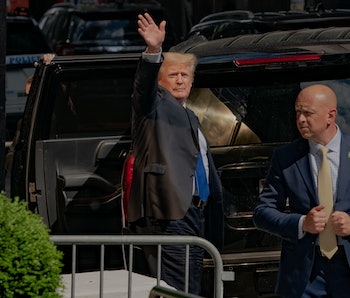 Despite its popularity with his rabid fan base, Donald J. Trump himself never actually joined Parler. The alt social network did reportedly conduct talks with Trump’s team, but he had some strict stipulations for doing so, including asking for a stake in the company.

We now have a few more details on the talks between Trump and Parler’s team, thanks to an excerpt from Michael’s Wolff’s forthcoming book, as published by New York magazine. Wolff’s book, which focuses on the last days of Trump’s presidency, delves briefly into how Parler factored into Trump’s experience of January 6.

It’s a well-documented fact, at this point, that social media played a prominent role in the organizing of the rally that led to the rushing of the U.S. Capitol. Social media was very much at the forefront of Trump’s mind the morning of January 6 — the Trump family had a follow-up discussion with Parler about joining the platform that day, according to Wolff. And the talks didn’t exactly go well, mostly because Trump couldn’t handle moving to another platform with people critical of him.

No critics, please — Though Trump already had a truly massive fanbase on Parler by January 2021, he still hadn’t joined the platform himself. Most of his family hadn’t, either, a continued absence that definitely turned heads. The family held back because it wanted — what else? — a cut of Parler’s profits. By January, Parler had actually agreed to Trump’s request for his deal to include a 40 percent stake in the company.

Wolff’s narrative reveals the sticking point of these talks was actually related to Trump’s critics. Though much of Parler is filled with hate speech, misinformation, and blind praise for Trump, there are some anti-Trump users on the platform — and Trump wanted Parler to ban all of them.

“Parler was balking only at this last condition,” Wolff writes of the proposed silencing.

It’s never too late — Though Trump’s talks with Parler stalled at this stipulation, we aren’t yet counting out the possibility that he’ll still come to the platform in the future. Trump’s access to mainstream social media platforms has been all but cut off since January, and his silly attempt at creating a self-hosted blog went nowhere fast.

Trump’s ability to address the public from the comfort of his smartphone has all but run dry. Even his longtime ally Mike Lindell’s alt social network has failed to attract his attention.

With so few options left, Parler is likely looking more attractive to Trump than ever, haters be damned. But then again, we’re talking about one of the world’s biggest egos here, so maybe he’ll choose silence instead. Let’s hope for the latter.