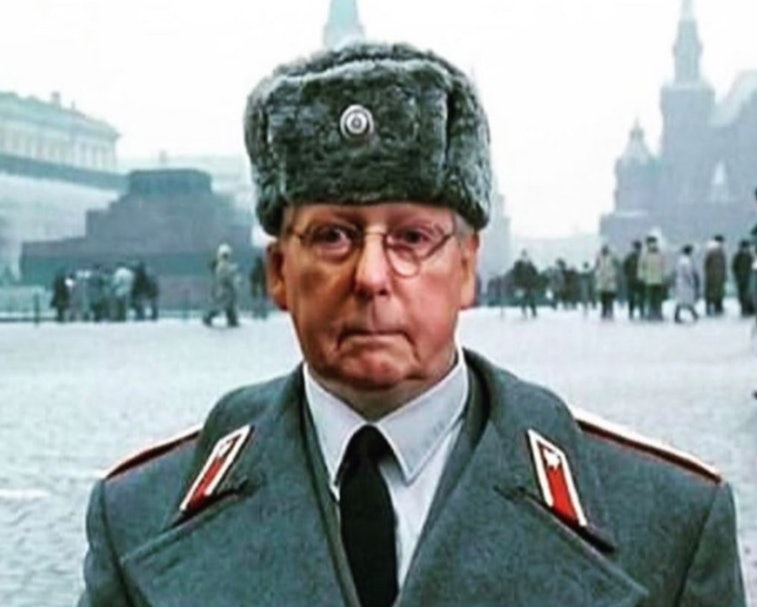 Triggered much? This week, Donald Trump got openly heated about a meme depicting Senate Majority Leader Mitch McConnell. The tweet came from an account called @MarcusPollos and it depicts McConnell as an ordinary Soviet soldier in military garb from that era. It's a rather straightforward criticism raised against McConnell by critics who believe that he did not do enough to stop reported Russian interference in American politics.

The obviously doctored image ruined Trump's mood, clearly. "Why does Twitter leave phony pictures like this up, but take down Republican [or] conservative pictures and statements that are true?" Trump tweeted. "Mitch must fight back and repeal Section 230, immediately. Stop biased Big Tech before they stop you." Republican senators introduced a bill on Tuesday that would make sweeping changes to Section 230.

Raging about a meme is one thing. But the president of the United States calling for unconstitutional retribution is a completely different — and alarming — situation.

What is Section 230? — In his tweet, Trump was calling for repealing a provision within the Communications Decency Act of 1996. This particular provision protects free speech specifically on the internet. It remains one of the most powerful sections of the CDA and states:

No provider or user of an interactive computer service shall be treated as the publisher or speaker of any information provided by another information content provider.

This means that websites that publish or share speech are legally sacrosanct and cannot be punished for what people publish on these mediums. For someone who frequently shares doctored content, memes, and openly racist content, the president appears unable to take a bit of humor from his opponents. Section 230 has been a target of the GOP for months, ramping up after Trump called it out in an executive order this past spring.

The ugly irony — A worrying swath of Trump's most hardcore fans frequently and baselessly insist that the president is a proponent of free speech. It would be more realistic to say that Trump appears to favor free speech when it suits him and his ideology. In this case, a tweet that mocks McConnell runs against Trump's image as a Republican leader. It makes his party look morally compromised and the members of his team appear comical.

Trump's conveniently applied support for free speech is nothing new. That said, with the kind of power Trump wields as the president of the United States, it is troublesome that he and his fanbase are incapable of seeing — much less calling out — this inconsistency in this position.

The contentious philosophy of free speech stipulates that your right to the First Amendment is protected by law, regardless of your political positions. Calling this a case of "tech bias" against the right-wing crowd — a claim that has been debunked on Capitol Hill itself — is histrionic, unsubstantiated, and potentially dangerous as it enables a victim complex in a fanbase already openly calling for violence.