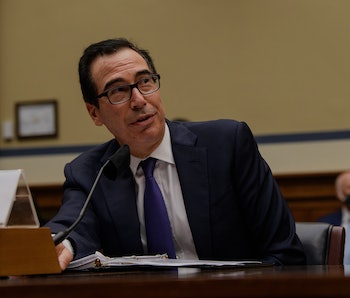 Sources close to the TikTok ordeal tell Bloomberg that officials are getting closer to signing on the deal for its U.S. operations. The news comes a day after it was reported that the Trump administration had yet to give its blessing for the agreement. According to the report, now the Treasury Department, Chinese company ByteDance, and America-based company Oracle are almost heading toward agreement about TikTok's future — and stability — in the U.S.

Before Oracle dominated the subject of handling TikTok's American business, there were rejected bids and sources even said that Instagram founder Kevin Systrom had preliminary negotiations about potentially spearheading TikTok as its CEO. It's been quite an intense year for the company as it attempts to improve its on-app and beyond-app image.

On late Wednesday, Treasury Secretary Steve Mnuchin reviewed the terms of the agreement and sent ByteDance his own revision, which has yet to be revealed.

So far, TikTok has attempted to inch away from its Chinese background and offer a more reliable and trustworthy image to American officials within Donald Trump's administration. The company states that its headquarters for the United States operations will be based in the country, American data will be processed and stored locally, and ByteDance will supposedly have no access to insider source code and other information after the transaction is finalized.

What happens now? — Trump had set September 20 as the official deadline for TikTok to divest from its ByteDance roots and turn to an entirely American infrastructure or it could get hit with a full ban. Right now, despite news that Mnuchin has sent his revision, it is not clear which direction Trump will take. In the recent past, he has criticized the app for being a national security risk while the ongoing tension has resulted in its latest CEO and former Disney executive Kevin Mayer stepping down from his role just three months into the job.

'Repackaging' worries — White House chief of staff Mark Meadows said that the apprehension was toward the possible "repackaging" of the deal, which would fail to please officials. "We’re still looking at the potential details of the deal, and whether it meets the national-security thresholds, the American-interest thresholds," Meadows told Bloomberg. "My big concern is if all we’re doing is repackaging it and still keeping it as a predominantly Chinese-government run company, that would not sit well with the original goal the president outlined."