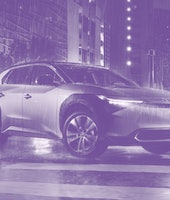 The base price for the upcoming Toyota bZ4X.

Toyota’s bZ4X — its first fully electric vehicle available nationally — is still on track for a mid-2022 rollout, although the company warns initial stock will be “extremely limited” due to supply chain issues. If you can manage to get your hands on one, however, it’s unsurprisingly going to set you back.

Although upping the battery capacity currently isn’t an option as is the case with other EVs on the market, prospective buyers will likely need to cough up another $1,200 or so for a “Delivery, Processing, and Handling fee.” The choice is yours, and still pretty pricey, but at least there are increasingly more options on the market.

The yoke got yeeted — Of particular note in the newest batch of bZ4X promotional images from Toyota is the conspicuously absent steering “yoke.” First unveiled last October, the trendy shape has apparently been nixed for the bZ4X, whose new images reveal a standard circular shape for steering. Although it is certainly an interesting design, the yoke popularized by Tesla quickly came under fire for being a pretty unsafe choice for the average driver. It seems like Toyota feels the same way, and is opting for a return to form, which is fine by us, as far as we’re concerned. Besides, everything else about the bZ4X still looks pretty sleek and badass.