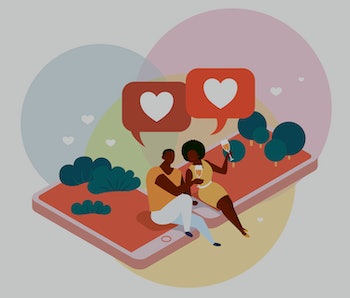 Just like any other aspect of our lives, dating has undergone an unmistakable and rather intense shift due to the coronavirus. With orders for social distancing and quarantining that have stretched on for months, the concept of intimacy — especially physical closeness like simply holding hands — seems like an alien idea right now, a remote possibility in the far future.

Yet despite the pandemic, dating apps are enjoying massive surges in user traffic. Of note, Tinder is raking in the big bucks, according to Sensor Tower. It reports that Tinder was the third highest-grossing app for the month of June. It's defeated titans like Netflix and Disney+ even. So what could explain Tinder's popularity right now?

Why Tinder? — One of the first things that pops out about Tinder's fame right now is that its competitors haven't been mentioned in the report. You don't see Bumble, OkCupid, or Hinge highlighted in the analysis, which shows that Tinder was downloaded two million times in May alone. Its revenue for the very same month skyrocketed to $36 million.

Due to the COVID-19 outbreak, the app has undergone dramatic changes with featured options to appear in regions beyond your current physical location. The app's company temporarily introduced the Passport feature, normally a Premium service, for free while users were encouraged to use its video chat feature for virtual dates, most definitely to limit person-to-person transmission. So users had the chance to explore romantic potential beyond borders. In more recent changes, Tinder announced that users can list up to three sexual orientations.

Of course, like the bulk of dating apps, Tinder has its major messy moments. But it seems unscathed compared to its rivals, and that versatility in app features might explain why it's faring far better than other dating programs.

Loneliness is lucrative — Still, there is a far more realistic, albeit cynical, explanation for Tinder's popularity. Lonely people looking for connections often make some of the most lucrative demographics to advertise to and possibly hook on apps. Human interaction is, after all, essential for survival. And when you're single during a pandemic, the idea of simply talking to another human being sounds cathartic and emotionally fortifying.

By no means is Tinder a wholesome, meet-your-darling-right-away spot for potential lovebirds but it certainly allows people to connect, no matter how those connections end up. There is a reason why Tinder reports daily chats on the app have shot up by 20 percent globally. With lockdowns in effect, bars forced to shut, socialization severely limited, and the very notion of romance suspended in uncertainty, people want to say hello to someone — even if it's a short-lived hello.