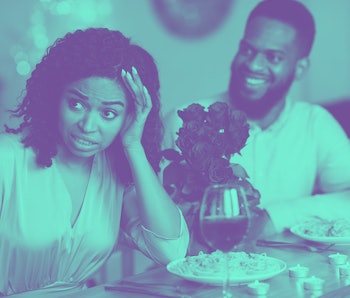 Tinder, the app gamifying millions of people’s love lives to the detriment of absolutely no one, is introducing a “blind date” feature in an attempt to appeal to Gen Z’s apparent interest in “old school” dating trends. Their words, not ours.

Curious romance seekers can now click the app’s “Explore” tab and select the “Fast Chat” feature, which then prompts users to answer a series of icebreaker questions. Tinder then matches people up based on their answers, at which time they’re enter into a “timed chat” round and are given questions like “I put ketchup on [blank]” and “It’s OK to wear a shirt [blank] times before washing.” If both respective parties like what the other douses in ketchup / their laundry routines / etc..., they are matched, and only then able to see each other’s profiles and photos.

Keeping up with the youth — According to Tinder, the new gimmick is a direct campaign to woo Gen Z users by “tap[ping] into their ‘90s nostalgia with a callback to dating in a pre-smartphone world” via highlighting how much they apparently “value authenticity.” “Inspired by the OG way to meet someone new, usually at the hand of a meddlesome aunt or well-meaning friend, Blind Date gives the daters of today a low-pressure way to put their personality first and find a match they truly vibe with,” reads the press release written by someone who is most certainly not within the Gen Z demographic.

The dating app company also claims that users made 40 percent more matches in the Blind Date feature than compared to other Fast Chat features that included visible profile photos, so that’s nice, we suppose. No clue on if said matches actually met up in person (much less kindled a budding romance), or if it simply introduced a whole new mechanic for disappointment. Such is the whirlwind that is dating in the 21st century.