“I would be afraid it would ring, and I wouldn’t know what to do with it.”

Warren Buffet, on his iPhone fears 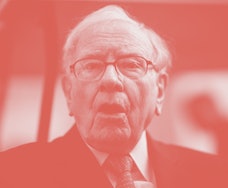 Billionaire business tycoon Warren Buffett needs no introduction. It's well reported that the 89-year-old is always bullish on Apple even when the stock takes a beating. But his business savvy doesn't extend to using an iPhone, apparently.

In an interview with Yahoo Finance!, Warren admits a two-year-old would be better at using at iPhone than him. Buffett says Tim Cook — yes, the Tim Cook, CEO of Apple — "patiently spent hours trying to move me up to the level of the average two-year-old" and "didn't quite make it."

When asked if he brought his iPhone to the interview, Buffett said he was afraid he wouldn't know what to do if the phone rang. "Somehow I was having a little trouble just getting into — but this is only me, any two-year-old could do this — but I was having a little trouble getting to the part where I actually phone somebody." Uh... Mr. Buffett, there's a green phone icon on the screen. Just tap it.

It's hard to teach an old dog new tricks — To be fair, he is an old dude. Plus, he only recently traded in his trusty $20 Samsung SCH-U320 flip phone for an iPhone gifted to him by Cook. So we'll cut him some slack, but it's still hilarious that he can't figure out an iPhone. Despite some tweaks to iOS over the last 13 years, the software hasn't fundamentally changed since Steve Jobs unveiled the original iPhone back in 2007. And it comes from a company that prides itself on intuitive user interfaces.

It's not just phone calls that Buffett seems to have trouble with. He says he doesn't use any apps, despite there being apps for virtually everything in the App Store, and plenty for the financially minded. From rookie finance bros to grandmasters. He should check out the Stocks app that's pre-installed on every iPhone. He'd love it.

A flip phone alternative — Cook is no doubt elated Buffett is off a flip phone — and in the Apple ecosystem, no less — but maybe what the billionaire really needs to overcome his smartphone fears is something familiar to his old flippy. Might we suggest the Galaxy Z Flip? Flipping it open and closed isn't as satisfying as a flip phone. But at least answering a call by opening it and ending a call by closing it would be something that would feel reassuringly familiar.