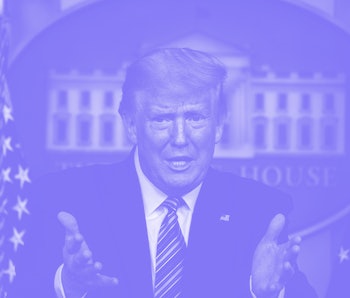 TikTok won’t be blocked from smartphone app stores in the U.S. this week, despite President Trump’s best efforts to do so. On Sunday, Judge Carl Nichols, a federal judge in the District of Columbia, partially granted TikTok’s request for a temporary injunction — mere hours from when the ban was set to go into effect.

If this story sounds eerily familiar, that’s because it’s a new iteration of the same thing that happened last week. The U.S. Commerce Department issued orders to ban TikTok from U.S. app stores beginning September 19 at midnight. That date was later pushed to September 27 to give ByteDance more time to work out a deal with a buyer in the U.S.

The situation with TikTok is enough to send anyone’s mind into a tailspin. The Trump administration’s increasingly unstable vendetta against ByteDance, the Chinese company that owns TikTok, has taken about a thousand too many turns in the last few months. The viral video app lives to see another day on U.S. soil — but its future is anything but certain.

Catch me up quickly, please — The minutia of the battle being waged by the Trump administration against TikTok and other companies based in China are nothing short of mind-numbing. The basics, though, are pretty simple. The Trump administration views China as a massive threat, both in cybersecurity and in business. TikTok, as one of Trump’s main targets, is doing everything in its power to avoid an all-out ban.

Let’s lay it all out — Here’s a quick timeline. On August 1, Trump announced he’d be banning TikTok whether or not ByteDance sold it to a company based in the U.S. By August 7 he’d issued an executive order banning TikTok and other apps made by Chinese companies within 45 days’ time. Microsoft quickly stepped up, ready to buy TikTok and save the day, but Trump favorite Oracle threw its own hat into the ring, too.

But both Microsoft and Oracle failed to buy TikTok’s U.S. business; instead, Oracle and Walmart are now in talks to purchase a 20 percent stake in a new U.S.-based company called TikTok Global. ByteDance has clarified that this deal won’t give either Oracle or Walmart any power over the app itself — which means it’s unlikely to quell the Trump administration’s pervasive concerns.

Back in limbo — Here we are again: waiting for the Trump administration to declare its next move, stuck in the grey area between Trump’s demands and the law’s checks and balances.

The federal judge’s injunction means TikTok is still available for download on U.S. app stores — but that could change at any time. The U.S. Commerce Department plans to continue pushing for TikTok to either relinquish control or leave the country, and the former is looking unlikely at best.

The Commerce Department’s orders will ban TikTok traffic from internet infrastructure in the U.S. beginning on November 12. Whether or not the full ban goes into effect will come down to a number of complex, volatile variables — not the least of which is Trump’s own whims.