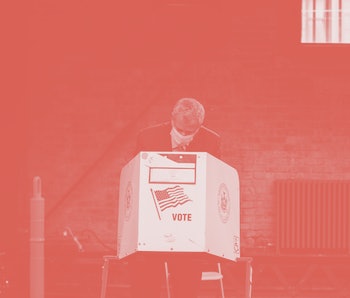 TikTok is joining the likes of Facebook, Instagram, Twitter, and others with election day resources and information for its users. On Wednesday, the company's head of safety, Eric Han, announced that the video-sharing app will present users with "authoritative information if they're having relevant conversations in our app" with regards to the 2020 presidential race.

In-app, users will have the ability to check TikTok's election guide and view the results of the state and federal races with Associated Press updates. So now you can cringe at viral dances and learn who'll run the White House for the next four years.

Crushing misinformation — According to TikTok, its content policies are prepared to handle any issues around "misinformation, disinformation, and manipulated media." This could include, but is not limited to, deepfakes, hoaxes, false advertising content, and the great specter of the moment... the self-tan candidate trying to falsely claim victory before the official results are out.

According to Han, TikTok will "remove content that seeks to intimidate voters or suppress voting" and that "we do not tolerate content or accounts that seek to incite violence. We've also detailed how we work closely with fact-checking partners — who are on expedited call during this sensitive time — to assess the accuracy of content so we can quickly remove false or manipulated videos."

Fact-checkers — TikTok will also employ fact-checkers, it says, in order to tackle any kind of false news emanating around election results, including premature or baseless claims. Although Han doesn't mention Trump or Trump loyalists himself, it's clearly a reference to the fears that either might question the legitimacy of the election and consequent results if Biden wins. Facebook too has employed its own strategy for the potential scenario involving the president declaring victory before official results.

Polling information — Ahead of the election next week, TikTok will also give users access to the United States Election Assistance Commission website for polling sites and hours, and a link to the Election Protection Hotline number which offers assistance in English, Arabic, Spanish, and additional languages.

Although TikTok launched its election guide in September, the company is making more efforts by way of partnerships and collaborations to bring awareness to its users and even field questions from curious users. It's a thoughtful move from a company hounded by American officials — and villainized by its head — over alleged national security concerns. With an accessible set of election resources for users in the country, TikTok might win its critics over. Or worsen their paranoia, if you're like Trump who is weirdly obsessed with platform. The platform must be hoping its nemesis will have more pressing things to worry about next week than teenagers mimicking dance moves.