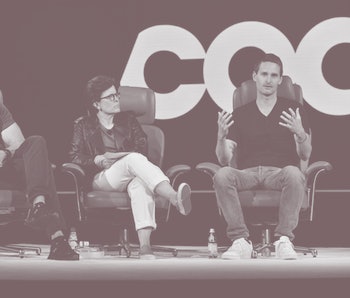 Mark Zuckerberg may be TikTok’s most prolific hater, but tech leaders across the board have been complaining about the app’s groundbreaking success as of late. To watch Big Tech gang up against TikTok, we need look no further than Vox’s Code Conference, where many interviewees and panelists brought up TikTok as a major threat — despite the company not being present at the conference in any form.

Scott Galloway, a professor of Marketing at New York University, was most vocal about his disdain for the short-form video app, reportedly calling for it to be banned entirely. (An episode of Real Time with Bill Maher in which Galloway appeared also aired this weekend, in which he makes it abundantly clear why he cares about this to such an extreme: “Are we down with an organization that wants to undermine America controlling what our children see?” he asks.)

Tech titans like Snap CEO Evan Spiegel also took time during their Code Conference appearances to rail on TikTok. It’s difficult to tell, at this point, where the envy ends and the actual criticism begins.

Money talks — One of the tech world’s biggest players, Google CEO Sundar Pichai, cited TikTok as a major competitor during his conference panel. Pichai’s comments on the matter skewed tame: “The thing about being in tech, competition comes from nowhere,” he said. “None of us were talking about TikTok three years ago.” (Interestingly enough, Google also recently cited TikTok as a competitor to its search-engine empire in response to antitrust allegations from the Department of Justice.)

As always, the “competition” in question boils down to revenue. Spiegel made this point most clear in his interview. He claims TikTok made it big not because of interest in innovation but because of an influx of investment funds. “No startup could afford to invest billions and billions and billions of dollars in user acquisition like that around the world,” he said.

Though, yes, we know now that TikTok has sent U.S. user data to servers in China in the past, there’s no evidence that this poses any real threat to users’ privacy. Meanwhile, there’s an entire American industry that allows tech companies to buy and sell user data for ludicrous sums.

Honing in on TikTok — an app that houses, for the most part, content that is just plain entertaining — as a sole force of data privacy evil is just counterproductive. Piling on the TikTok hate, especially in focusing on its successes, does nothing to further conversations around data privacy.