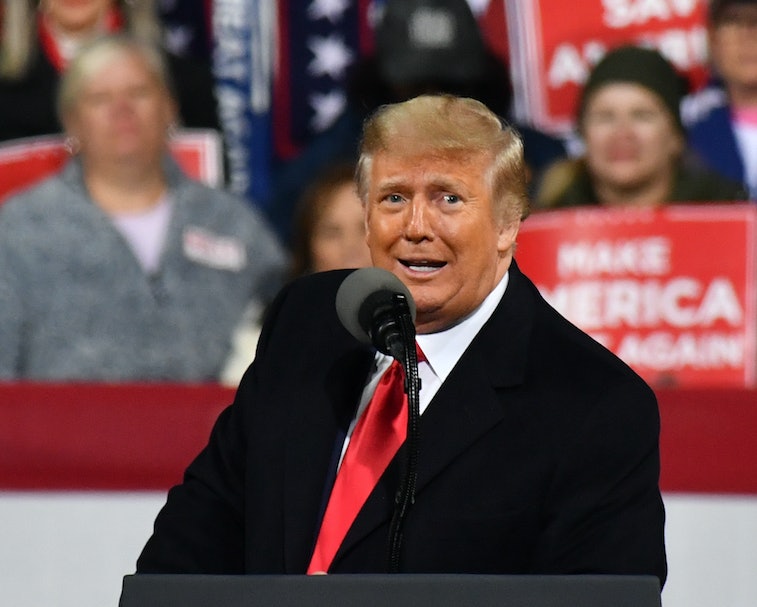 TikTok has been in outbound President Trump's sights for years. His attempts to ban it have failed. And now the same service that was instrumental in embarrassing the nation's greatest elected embarrassment is censoring the video he released in the wake of the attack on the Capitol Building. It's one of the silver linings in what's otherwise been a horrific week.

Probably not the outcome Trump hoped for — How did we get here, you may ask? Our most concise rundown of the made-up Trump-TikTok feud can be found here, but in a nutshell: Back in August, the Traitor-in-Chief tried to ban all Chinese-owned internet companies from U.S. platforms for ridiculous / vague / ridiculously vague reasons related to national security and the economy.

Various threats were made against TikTok in particular, the courts made some rulings, Oracle got in on the dealings, and then things just sort of fell by the wayside, as so many of Trump's projects do. Then this week happened which, granted, makes it pretty understandable why Don hasn't been paying much attention to the world's most popular app for dancing teenagers lipsyncing to pop songs. He, like us, has been a little distracted.

We'll take any consequences we can get — While we certainly don't mean to jinx anything, this week's events do feel like a moment of clarity for many Americans, including those at the top of the social media companies that are Trump's major sources of power. Facebook, Instagram, and Twitter have all been spurred to (at least temporary) action, and now his nemesis, TikTok, has gotten in on it, too.

As first reported by TechCrunch, the app is barring any posts featuring Trump's riot-inciting videos, and redirecting specific hashtags used by rioters, like #stormthecapitol and #patriotparty, to "reduce their content’s visibility in the app." Those subjects can still be discussed on the app, albeit only in the capacity of pointing out how ludicrous they are.

TikTok continues to lead the pack — Even without the Trump-induced app beef, it's not too surprising that TikTok is proceeding in such a clear, rational manner. The social media platform has long possessed one of the (comparatively) stricter content moderation policies, so censoring Trump's violent sedition certainly tracks. All this, coupled with the near-certain fact that Trump has never seen TikTok's Ratatouille musical, is cause to celebrate yet another failure for the outgoing President, who's the poster child for the tragic ability of white men from wealthy American families to constantly fail upward.