“As children and teens already grapple with issues of anxiety, social pressure, and depression, we cannot allow social media to further harm their physical health and mental wellbeing.” 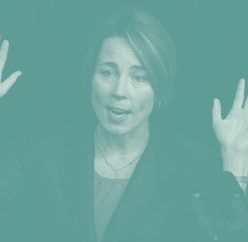 A group of attorneys general has opened an official investigation into TikTok’s effects on its youngest users, led by Massachusetts AG Maura Healey. The investigation will, in particular, look into whether or not TikTok is operating in such a way that “causes or exacerbates physical and mental health harms,” according to a press release.

AG Healey has long been vocal about her skepticism of allowing children to use social media sites like TikTok, Facebook, and Instagram. Last year, she was one of 44 attorneys general to plead with Meta to cease its planning of an Instagram for Kids app.

“State attorneys general have an imperative to protect young people and seek more information about how companies like TikTok are influencing their daily lives,” Healey said in a statement.

Attorneys general from California, Florida, Kentucky, Massachusetts, Nebraska, New Jersey, Tennessee, and Vermont will spearhead the investigation — the same group that has been investigating Meta for promoting Instagram to young children since last November.

TikTok says thanks — TikTok has already responded to Healey et al. in a statement, as reported by CNBC. It reads:

“We care deeply about building an experience that helps to protect and support the well-being of our community, and appreciate that the state attorneys general are focusing on the safety of younger users. We look forward to providing information on the many safety and privacy protections we have for teens.”

The response is unusually positive for a company accused of manipulating children by its product’s very design — particularly so in contrast with the responses we’re used to getting from companies like Meta. Take, for example, Meta’s official response to allegations of mental health harms, which amounted to: “We’ll fix it eventually.”

Honing in on the kids — Social media companies — and the internet writ large — has faced much-increased scrutiny into their effect on younger users in the last year or so. The public’s attention on the matter really picked up last September, when Frances Haugen leaked internal Facebook documents showing the company knew very well it had been harming teens’ mental health.

The issue has escalated to such a level that President Biden even took time in his State of the Union address this week to call out Big Tech for its treatment of children and teens. In other arenas of lawmaking, a number of senators recently introduced the Kids Online Safety Act, which would require companies like TikTok and Instagram to create tools to tweak recommendations algorithms and monitor screen time.

The attorneys general could genuinely help improve TikTok’s protections for teens in completing this investigation. Or the AGs’ suggestions could go ignored completely. TikTok is still a business, after all, and as much as we’d like to be optimistic, the money will always come first.