“Banjo expressly represented to the Commission that Banjo does not use techniques that meet the industry definition of Artificial Intelligence.” 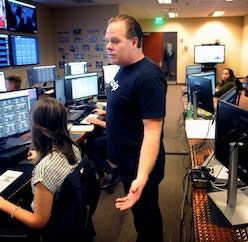 A state audit of problematic surveillance startup Banjo reveals that the company had no AI technology when it received a $20.7 million contract with Utah, despite such capabilities being its main selling point. As reported by Motherboard and OneZero, Banjo claimed that it would collect numerous streams of data in Utah through its software Live Time in order to help local law enforcement authorities fight crime. You might already know of Banjo’s CEO Damien Patton, who pleaded guilty to aiding a KKK leader in his plans to open fire on a synagogue.

The investigation revealed that Banjo did not have "any" AI capabilities and it was riddled with privacy risks. Since then, the contract has been suspended while an internal inquiry is underway.

One of Banjo’s goals was to provide a "solution for homelessness." It said that it would help the police investigate "opioid events." All of this was supposedly going to take place with the help of invasive swaths of data collected through CCTV cameras, people's social media accounts, the footage found in 911 emergency videos, and even traffic clips.

How we got here — Initially, Banjo claimed its objective was to “synthesize” and “unsilo” huge amounts of visual data to provide contextual information and explanations for dangerous events. Banjo even claimed in a sales pitch that its technology solved a child kidnapping simulation in “27 seconds.” In 2020, however, the company admitted that it didn’t actually have AI technology. State auditor John Dugall wrote, “Banjo expressly represented to the Commission that Banjo does not use techniques that meet the industry definition of Artificial Intelligence.”

The problem is far from over. Although the contract has been suspended and a privacy inquiry is taking place, the issue that Banjo received highly sensitive visual data from the state of Utah remains unsolved. “The architecture of Live Time’s access to certain public safety systems should not have been permitted based on existing industry best practices,” the report notes.

Banjo did not, according to the report, do enough to ensure the privacy of the databases it accessed. For example, a bad actor could easily access Utah's emergency databases and even change information inside these sets due to this faulty privacy infrastructure. Of course, these legitimate criticisms haven’t really put a kibosh on Banjo’s operations. In order to shield itself from further negative press, “Banjo” now goes by the name of “safeXai” and the show goes on.