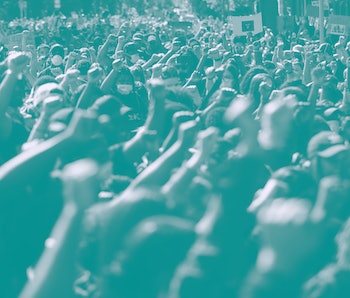 As protests surrounding the murder of George Floyd continue across the United States, many activists have fought to spread a simple message across social media: stop posting protestors’ faces. Doing so leaves open the potential for those seemingly harmful tweets to later be used for police tracking purposes.

But even blurred faces can be revealed with modern technology, and built-in metadata can be used to track down the person who took the photo. That’s why Everest Pipkin, a Texas-based programmer, created a simple Image Scrubber tool: to make it easy for protesters to share their images without compromising their online anonymity.

Along with the tool, Pipkin assembled a very useful list of resources for covering your digital footprint, which covers everything from the most secure email services to best practices while attending protests.

Social media has made it incredibly easy to spread awareness of ongoing protests and violence against those working to create change. Unfortunately, that ease also extends to later finding those protestors and using photos as evidence against them. Pipkin's tool is a simple and effective way to keep yourself and fellow protestors out of harm's way in the future.

Not just faces — Though many programs exist that allow users to blur faces and other identifying features, many fail to account for behind-the-scenes information. Metadata embedded in a photo — stored in a standard called Exchangeable Image File Format (EXIF) — contains all kinds of information that might be valuable to investigators. That includes everything from the model of your smartphone to the GPS coordinates of the photo.

Open-sourced activism — There’s a lot to admire in Pipkin’s program. It’s easy to use on the fly, which is important when it comes to creating social media posts, and it contains everything you need to remove both EXIF data and identifying features from the image itself.

Pipkin has also chosen to leave his program open-source, which allows for collaboration from other activists and programmers. Since the tool’s release two days ago, Pipkin has already used feedback to improve the security of the tool’s blurring methods, as well as a rectangle shape tool and an undo brush for even easier blurring.

This is the perfect example of how open-sourced collaboration can be used to create effective, usable software to solve on-the-fly issues as they arise. It’s also a reminder that not all activism has to be completed by being physically present at the site of marches and other protests. Sometimes helping a movement looks more like using your skill sets from the couch and sharing them with the world on GitHub.