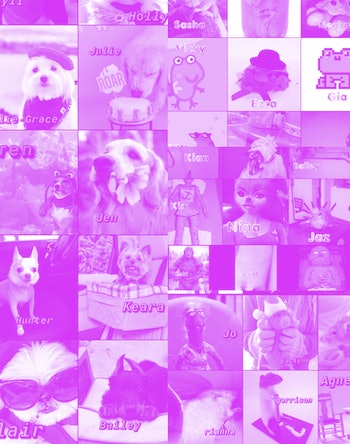 According to the internet, I am a chiseled cartoon rat, a rodentian beefcake with muscles etched to perfection and a set of flawlessly perky — dare I say, erect — peach ears. Or I am a coolly unamused pug, chins scrunched into neck and eyes cast sideways with a sense of confounded contempt that’s not quite strong enough to make me get up off the couch. Or I’m a cottagecore possum donning the pretty, freshly-plucked flower I found, presumably, while dumpster diving.

I may not yet exist as a frog or a horse, but my hopes are high. My favorite way to be is the ethereal person-snail, a hilariously grotesque mashup of parts that leans more David Lynch than Junji Ito. But it all started with the cats.

Over the last seven days, my Instagram DMs have been flooded with images all following the same design — some absurd photo of an animal or otherwise ridiculous object with my name superimposed in lettering that reeks of Word Art. I’ll bet yours have been, too. It happened out of nowhere; one moment a standalone dog photo, the next, dozens upon dozens of spinoffs. Instagram Stories are packed with them, our feeds fully stacked. And you know what? Keep ‘em coming.

The 19-year-old college student behind @whatdogyouare, who’d prefer to remain anonymous, tells Input she started it "pretty much immediately after I saw the cat one" — that being @what_cat_you_are, which has since gone on hiatus. "I honestly don’t even know what possessed me to start doing it," she said. But, she’ll stick with it "as long as the momentum keeps up."

"It’s already slowed down a little bit, but I mean, I’m still getting followers, I’m still gaining. So as long as people are still interested, I’ll keep it up."

No one could have anticipated the meteoric rise of the latest, arguably stupidest, meme format dominating social media right now, especially not its creators. It may be among the current leaders, but @whatdogyouare only got started last Thursday. Now it boasts 121K followers. And others that jumped on the bandwagon right after its creation have seen the same immediate success, in some cases like @what_frog_you_are even surpassing the followings of their predecessors in a matter of days. There’s no obvious beef between them, either — actually, several are in a group chat now, connected by newfound Instagram stardom.

For the original, @what_cat_you_are, the demands of that instant popularity may have been a bit too much to deal with. Sometime between this week and last — not long after putting the trend on the map — the account’s creator, Dustin, shared a Story informing followers that he’d be stepping back, before deactivating the page. It briefly popped back up this afternoon with 31K followers and, apparently, someone new behind the wheel, but it’s already gone back down as of this writing. It is, after all, a ton of work to keep up with.

The creator of @whatdogyouare says she’s been getting "like 100 DMs every five minutes" from people hoping to put in requests. It’s a lot to juggle, even with help. "I’ve had a lot of friends help me out," she told Input. "I’ve had friends help me start a website, help me with starting the spreadsheets, and friends send me pictures. It’s definitely been a group effort, with friends and family."

"I did not know that I was going to blow up, I didn’t even know that this was at all possible," she added.

It did blow up though, and some creators are using the opportunity to direct their thousands of new followers toward something more meaningful. The @what_image_are_you account is funneling donations into For the Gworls, The Okra Project, and G.L.I.T.S. — all initiatives supporting Black and queer communities — as well as Children of the Night, which fights for children affected by juvenile prostitution. And @whatdogyouare is accepting donations for Royal Animal Rescue, a non-profit, no-kill shelter in her local Georgia.

The trend may just be a blip in the memeverse, fated to disappear as abruptly as it sprouted, but the individual efforts of its loudest players are making its impacts more palpable than other here-and-gone moments of the internet — and it’s come at a time when we couldn’t have needed it more.

"I’ve been thinking about this, like why is this so popular? It doesn’t make any sense," the creator of @whatdogyouare says of her account’s success. But the answer is probably pretty simple. Dogs bring people happiness, she explains, and we could definitely use a bit of that right now. "To me, it seems like a little bit of happiness in a lot of uncertain times."