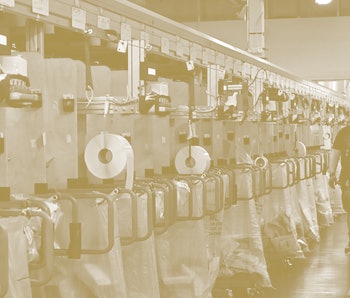 The United States Postal Service has been removing mail sorting machines from some facilities around the country, according to a report from VICE. It comes at a time when the new postmaster general appointed by President Trump has been implementing significant cost cuts at the agency that have led to delivery delays across the country. Some believe the moves are an intentional way to slow mail service just as many Americans plan to vote by mail in the upcoming presidential election.

Interesting timing — The USPS hasn't explicitly stated why it's removing mail sorting machines now of all times, though the agency said in a statement to VICE that it regularly moves equipment to different locations in order to match volume and keep costs down. The machines do exactly what you'd think – they take in letters and drop them into slots for the appropriate destination. Humans still sort the packages that account for most deliveries nowadays.

Depressed letter volume (marketing mail is down 15 percent through June of this year) means that it's often possible for one person to operate a sorting machine instead of the typical two, and less of the machines are needed overall. Still, it's a concerning move just as a large influx of absentee ballots are about to hit post offices all over the country. Many people will opt to vote by mail in order to protect themselves from the coronavirus. Trump has falsely attacked mail-in voting as ripe with fraud and explicitly said he would block additional funding to the postal service in order to prevent it from processing mail-in ballots.

There's never been evidence of any significant voter fraud, and in places like Utah, voting by mail is favored for people who live in rural areas and those who want time to conduct research if they see a candidate on the ballot they haven't heard of.

It's not a business, stupid — The postmaster general, Louis DeJoy, has said that changes like eliminating overtime are intended to reduce costs at the postal service, which typically operates at an annual loss, and bring it closer to profitability. But that ideology highlights a fundamental misunderstanding of the USPS, which is a government service rather than a for-profit business. It's supposed to offer reliable delivery service at affordable prices, and deliver all around the country, even in rural areas where FedEx and UPS wouldn't operate because it's not profitable to do to so. The USPS is not a business in the traditional sense even though conservatives want to see it that way. We all accept that taxes are meant to fund certain public goods that raise the quality of life for everyone.

Postal workers have been pushing back aggressively against the cuts, raising alarms that Americans across the country will see significant delays in receiving crucial mail like social security checks and medication.

Trump has attacked the USPS in the past for charging Amazon subsidized delivery fees even though it offers contracts to all customers delivering large amounts of mail. Amazon CEO Jeff Bezos coincidentally owns Trump's enemy, The Washington Post.

The reduction in mail sorting machines might not be a problem depending on when ballots are sent out, and how long voters wait to send them back. If mail-in ballots are sent and returned over a period of weeks rather than days, postal workers who spoke to VICE said there likely won't be any issue counting them in a timely manner, despite all the cuts.

So basically, don't wait to return your ballot. Nobody wants to see election day drawn out into a multi-day affair, or false hopes that one candidate has won before everyone's vote is counted.