The U.S. is investigating TikTok for being a haven for child predators 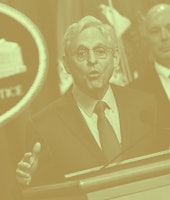 The increase in Homeland Security's TikTok-related investigations between 2019 and 2021.

One of the country’s most popular and booming social media platforms is making it far too easy for child predators to exploit underage users, and the U.S. government is well on its way to cracking down on the problem. According to the Financial Times, both the Department of Homeland Security and the Department of Justice are investigating TikTok over its handling of illegal child sex abuse materials, as well as a privacy feature that is enabling malicious actors to propagate and share illicit content.

Speaking with FT, the Department of Homeland Security’s unit chief of child exploitation investigations referred to TikTok as “a perfect place for predators to meet, groom and engage children,” and described it as the “platform of choice” for abusers. Between 2019 and last year, Homeland Security investigations of crimes originating on TikTok have risen over 600 percent.

A perfect storm — There are a number of factors contributing to child predators’ increased reliance on TikTok. For starters, ByteDance, the Chinese-owned company that owns TikTok, is having immense trouble scaling at the speed required for its over 1 billion users, the report notes. Although TikTok’s advertising profits increased from $3.9 billion to $11.6 billion in one year alone, ByteDance can’t keep up with hiring the number of moderators required to police its app’s content. Meta, for instance, has at least 5,000 more moderators than TikTok’s estimated 10,000, as well as a suite of AI tech designed to catch abusive materials.

Another factor is the location of TikTok’s parent company. Law enforcement officials claim that the Chinese business is far less inclined to work with American justice departments than their stateside competitors. That makes investigations and accountability much harder than it is with, say, Facebook or Instagram... although it’s not exactly as if those are being properly reined in, either.

Loophole tech — The “private account” feature in TikTok is also a huge issue for authorities and child rights groups. Experts recount how certain “code words” are often utilized in usernames, bios, and public videos, while illegal content is hidden within TikTok’s “Only Me” function accessible by a password that can be shared among multiple users. Until issues like that are improved upon or resolved, underage TikTok users could remain incredibly susceptible to dangerous predators.