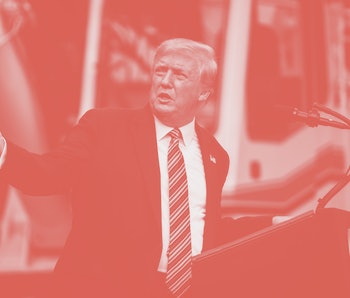 The British government announced on July 14 that the U.K. would next year ban telecommunications companies from purchasing Huawei’s 5G equipment. But that ban could be reversed and made moot if Donald Trump loses the United States’ 2020 Presidential Election, according to a new report from The Guardian.

The ban announced last week was meant to be “irreversible,” said Oliver Dowden, the U.K. Secretary of State for Digital, Culture, Media, and Sport. It also requires all existing Huawei 5G infrastructure to be removed from the U.K. by 2027.

But the U.K.’s decision to ban Huawei equipment was reportedly due to pressure from the United States following the country’s own ban on Huawei’s 5G technology. The Guardian has learned from confidential sources that the British government told Huawei privately that it was being banned from the U.K. partly due to “geopolitical” reasons.

China is understandably unhappy with last week’s announcement. The country’s ambassador to the U.K. said in a tweet: “This is a very bad decision. It is a dark day for #Huawei and China-UK relations. It’s an even darker day for UK, because it will miss opportunity to be a leading country in 5G.”

Now it’s looking like maybe Huawei and China won’t need to worry about that decision after all.

Flip-flopping with big moves — Back in January, the U.K. announced the Huawei equipment could indeed be used to build the country’s new 5G networks, albeit on a restricted basis. That decision made it clear that, at least on some level, the U.K. trusted Huawei with bringing its technology into its borders.

Just six months later the situation has changed, though, particularly with the U.S. government's decision to cut Huawei off from integral parts of its supply chain. The U.K. believes the uncertainty created by this decision would make it difficult to ensure the security of Huawei technology in the future.

Consensus or security risk? — In last week’s announcement of the ban, Dowden called Huawei a “high-risk vendor,” echoing a sentiment oft-repeated by the United States. And the U.S. was vocal about its approval of the decision.

“The reported U.K. action reflects a growing international consensus that Huawei and other untrusted vendors pose a threat to national security, as they remain beholden to the Chinese Communist party,” said Robert O’Brien, Trump’s national security advisor. “We look forward to working with the U.K., as well as our many other partners and allies, to spur innovation, promote vendor diversity in the 5G supply chain, and ensure 5G security free from dangerous manipulations.”

The Guardian’s report makes O’Brien’s “international consensus” look a lot like one borne of coercion rather than one rooted in genuine security concerns.

A pinprick of light in the darkness — The United States’ longstanding vendetta against Huawei is having international consequences for the tech giant. Trump has been an extremely vocal advocate for pushing Huawei out of the worldwide market altogether.

In fact, Trump claimed credit for the U.K.’s latest ban; in a White House press conference the same day he said, “I did this myself, for the most part.”

In response, Matt Hancock, the U.K.’s health secretary, said, “All sorts of people can try to claim credit for the decision but this was based on a technical assessment by the National Cyber Security Centre about how we can have the highest quality 5G systems in the future.”

The extent to which the U.K.’s ban is driven by security risks or international politics is unclear, but it’s obvious by officials’ statements that the decision is some mix of the two. One thing is clear now, though: this ban is only “irreversible” if international politics deem it to be. Huawei could be feeling more optimistic by the end of 2020 if the election doesn’t go Trump’s way.