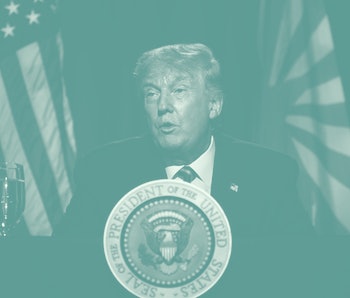 We’ve been waiting on anxious heels for TikTok to sell its U.S. operations to either Microsoft or Oracle to appease President Trump’s anti-China diatribes. But as the proposed deadline for the buyout edges ever nearer, we’re left with more questions than answers.

The latest tidbit of information we’ve been left to muse on: a new deal between Oracle and ByteDance, TikTok’s parent company, wherein Oracle will become TikTok’s “trusted tech partner” in the U.S. Since neither company has exactly been forthcoming with details about this proposed partnership — we’re relying on a variety of third-party reports to know what little we do — the details are far from concrete.

The proposed partnership is now under official review by high-ranking Trump administration officials in the Treasury, according to a report from The New York Times. Some of Trump’s advisors are leaning toward accepting the deal, people familiar with the matter said.

This partnership would look nothing like the outright sale of operations Trump has been pushing since early August. In fact, it’s looking like the partnership wouldn’t even include a cut of the profits going to the U.S. Treasury — which Trump has been hoping for. ByteDance would retain ownership of TikTok, just with some mitigation from U.S.-based Oracle. The deal's future is anything but certain.

What do we know? — By all accounts, TikTok is no longer selling its U.S. operations to any company. Microsoft announced this weekend simply: “ByteDance let us know today they would not be selling TikTok’s US operations to Microsoft.”

Oracle did not make such a statement, but early reporting from The Wall Street Journal claimed the software conglomerate was also no longer in negotiations for an outright purchase. Instead, Oracle and ByteDance are working on an agreement that would allow Oracle to mitigate supposed “security risks” associated with TikTok while ByteDance maintains ownership of the company.

Since then, Oracle has confirmed that it is “part of the proposal submitted by ByteDance to the Treasury Department,” though the company declined to elaborate. TikTok said in a statement on Monday that this proposal would “enable us to continue supporting our community of 100 million people in the U.S. who love TikTok for connection and entertainment.”

Separately, Walmart is apparently still looking to buy some stake in TikTok, too. The company posted an update this weekend on its corporate website, stating: “Walmart continues to have an interest in a TikTok investment and continues discussions with ByteDance leadership and other interested parties.”

Trusted tech partner? — The details of the deal between Oracle and TikTok are scarce at best. Everyone just keeps repeating the same phrase: “trusted tech partner.” Oracle will be the “trusted” partner in the situation, ostensibly to review and manage TikTok’s U.S. operations so as to quell the Trump administration’s fear that China is somehow spying on us through the app.

Treasury Secretary Steven Mnuchin, one of Trump’s top advisors, spoke briefly about the proposed partnership on CNBC last night. He again called Oracle a “trusted technology partner” for TikTok and said Oracle had made “many representations for national security issues.” That’s about as much elaboration as we’ve gotten yet.

Where do we go from here? — That will very much be up to what the Trump administration decides. And, because the new proposed deal doesn’t exactly hit the marks Trump has been looking for, it’s difficult to decipher how the deal will play out.

It’s possible Trump will not go for the deal. The U.S. likely won’t see any monetary profit from the deal, and it wouldn’t solve the reason this all started — China. With ByteDance still overseeing TikTok’s operations, China will still very much be involved in the equation, which is exactly what Trump has been pushing against.

On the other hand, it seems Trump’s advisors might attempt to sway him toward accepting the deal and putting this to rest. Oracle’s deep ties to the Trump administration could, indeed, help pull the deal through.

At least one lawmaker, Sen. Josh Hawley (R-MI) has written to the Council for Foreign Investment in the United States, asking that they reject the new proposal. Hawley wrote that Oracle’s potential partnership would leave the existing problems intact. “In short,” he wrote, “the proposal violates the President’s executive order.”

Maybe Trump will go for the deal. Maybe he won’t, instead doubling down on his threats and fully banning TikTok in the U.S. As with all of Trump’s decisions, we won’t know what to expect until the blow has been dealt.