The Tesla Cybertruck is now only arriving some time in 2022 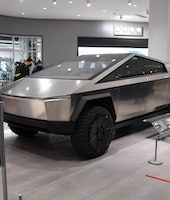 We have some bad news to report this morning to the literally 20 people out there who put down $5,000 on their boutique, $50,000 RV camper attachment for Tesla’s “edgy” Cybertruck that doesn’t exist yet: 1) the Cybertruck will not exist now until at least 2022, and 2) your excessive wealth is obscene.

Of course, we don’t know this from an official Technoking tweet or press statement courtesy of Tesla. Instead, it comes from the very quiet alteration to the Cybertruck’s customization order page, which now notes that customers will be able to begin choosing detailed specifications as “production nears in 2022.” As Engadget explains, Elon Musk had already stated in the past that single-motor trucks would arrive later, but that now applies to the dual- and tri-motor machines,” as well.

If there’s one thing Tesla’s good at (other than making other car companies speed up their EV plans) it’s missing deadlines, so at least it’s consistent.

Not surprising — Unlike other hyped projects from Musk, at least Cybertruck’s arrival expectations have been somewhat tempered from the outset. Back at the start of the year, the Tesla CEO confided that only a “few deliveries” could be expected by the end of 2021, so to see the timeline pushed back entirely to 2022 isn’t the biggest shift, per se. Still, Tesla fanboys are gonna have to wait at least a little bit longer before they can take to the roads in their futuristic trucks that may elicit as many eye-rolls as oohs and ahhs.

Giving an advantage to Ford — The biggest fallout from the Cybertruck’s latest delay isn’t fan disappointment, but its sacrifice within the larger EV market. Depending on when the Tesla pickup finally arrives on the streets, Ford’s upcoming F-150 Lightning or Rivian’s R1T could both beat it to the punch, giving consumers who’ve been holding out for EV trucks options other than Tesla’s.

While the Lightning isn’t due until Spring 2022, Ford’s price tag and name recognition, in particular, could handicap Tesla’s Cybertruck from the outset. That said, Tesla has reportedly already received over 1 million pre-orders for the Cybertruck, so the EV truck battle is far from finished.

Or you could be EV practical — Of course, if you don’t need the space of a truck and your dignity isn’t a big deal, Nissan recently announced its 2022 Leaf S with a starting price of $27,400, and that’s pre-tax incentives. Factor those in, and you’re looking at a sub-$20,000 EV that gets about 150-miles to a charge. It’s no futuristic Mad Max wagon... but you can buy it right now.