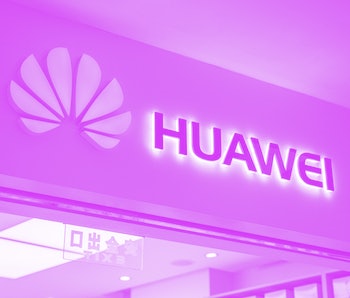 A considerable lot of the tech sector has, understandably, voiced opposition against the Trump administration's hostility toward Chinese tech giant, Huawei. For them, it comes down to maintaining an innovation edge over the company through an undisrupted trade route. But, according to The Wall Street Journal, there's another and rather major opponent to the Commerce Department on this matter: the Pentagon.

What the Pentagon says — Anonymous officials close to the issue told the publication that the Pentagon had stood against the Commerce Department's proposal to tighten trade routes between American firms and Huawei. The Wall Street Journal noted that officials within the Department of Defense and the Treasury Department have criticized regulations against Huawei as they worry that these trade obstacles could jeopardize the revenue required to carry out technological research and maintain an upper hand over China.

A rift within — Donald Trump's obsession with blacklisting Huawei and other Chinese companies, mainly delving in artificial intelligence and machine learning, is nothing new. But not everyone in his administration sees eye to eye with him.

While some commerce officials view these proposed regulations against Huawei as a necessary mechanism to defend the American economy, others criticize this position as they say it disrupts free trade between both economies and could give China a technological edge, especially when it comes to next-generation 5G networks.

What happens now? — Departmental matters are secretly private. As The Wall Street Journal notes, officials from the Commerce, Defense, and Treasury departments are expected to meet in the next few weeks to reach common ground. For them, the issue isn't to entirely do away with clamping down on Chinese and American trade supply; it's about finding a method everyone agrees upon. And given what we know of government, that's an impossibly difficult undertaking.