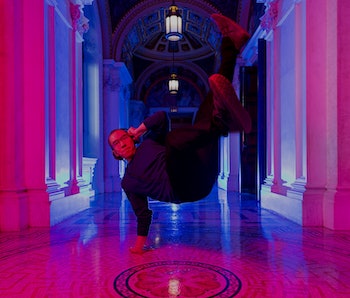 Modern copyright law can make it super difficult for writers and producers to find samples they can use in songwriting that won’t break the bank or get them sued. Foo, who is himself a data-visualization artist and hip-hop fan, said the project finds its roots in the hip-hop of the 80s and 90s, when DJs would browse obscure records to make “new, relevant, and infectious music.”

Now Foo is making the sound-discovery process easy again with Citizen DJ. If implemented well, the project could quickly become a favorite for hip-hop creators around the world.

Plus a nice remix tool — While Foo’s main goal is to make browsing the Library of Congress’s sound collection easier, the project will also have some nice extras. Citizen DJ’s web interface goes one step beyond browsing by hosting a simple remix program connected to the library’s collection of samples.

Just grab a few sounds and get mixing, no download required.

Open-source for the new decade — Foo’s project is smart in that it takes existing free resources and makes them more accessible to those who could use them most. The Library of Congress has long held an enormous collection of audio along with its books, but they don’t see much action because they’ve never been easy to find.

Foo is astute in his assessment of modern hip-hop; copyright law has forced artists to choose between money and sound all too often. And the discovery process itself, which was once made easy by the wide existence and popularity of record stores, has been stunted by a shift to digital media.

Foo gave a quick tutorial of the system on Friday; you can check that out on The Library of Congress’ Facebook page. Citizen DJ is planning a full launch sometime this summer. In the meantime, a test version of the application is open for browsing until May 15. The hope is that this testing period will allow Foo to work out any bugs and that owners of interesting sounds will catch wind of the cool project and donate them.