“Sometimes you’ll hear them mumbling under their breath, ‘Who knew a camera person’s job would be so hard?!’” 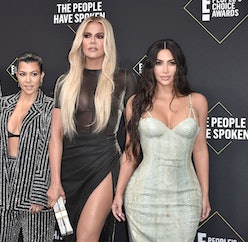 In an equal parts illuminating and horrifying interview with Elle, executive producer Farnaz Farjam detailed how the Kardashian-Jenners are shooting new episodes of Keeping Up with the Kardashians (KUWTK). While other productions across the world have come to a halt or transitioned to a remote structure, the Kardashians have found a middle ground that involves iPhone drop-offs and pickups as well as a new respect for their crews.

Aside from the wanton consumption that comes from having fresh iPhones delivered each week — which is to be expected — what the story highlights is how irrelevant celebrities are in the era of coronavirus. Watching rich people isolate turns out to be even more torturous than isolating oneself.

They’re shooting everything themselves — After Farjam and momager blueprint Kris Jenner decided the family would record themselves, they quickly realized the video quality was too poor. A director of photography and a lighting technician were hired to create well-lit confessional rooms in Kim and Khloé’s homes. Donning hazmat suits, the pair also left behind phone-friendly tripods and wiped everything down with sanitary wipes.

Khloé Kardashian's camera skills with a little cultural appropriation, as a treat.

To solve the issue of the video quality from everyone’s personal phones, everyone is supplied with brand new iPhones every week. On Mondays, a masked assistant hands off the new phones to security teams in exchange for the ones used to film the prior week. There’s generally about 16 hours of footage for the studio’s editorial department to try to cobble together storylines from. According to Kris Jenner... And All Things Kardashian, a typical day of shooting lasts 18 hours. While certain family members like Kim are happy to record, Kourtney (possibly trapped in the KUWTK universe despite quitting) reportedly wants to “detox” from her phone.

Sometimes, the show must stop — This is a truly bizarre piece of PR. YouTubers have generally had an easier transition to recording at home. Late-night shows and Saturday Night Live slowly figured out how to set up recording spaces with their families, mail props, and lean on their post-production teams.

The Kardashians have iPhone couriers when enterprise cloud storage is available or they could learn to transfer the files to external hard drives if they’re concerned about leaks. Plus, they have a lighting team going to the trouble to make their mansions better backdrops to whatever drama can take place in multimillion-dollar fortresses.

Farjam is convinced the resulting episodes will be compelling and dare we say "relatable" as Kim wrangles four children. “No matter how big her house is, four kids is four kids. It's a lot," she told Elle. Given the confirmed continued presence of security, one would imagine domestic help is still onboard.

Four kids is a lot!

Now, in these trying times, no one is trying to block these workers’ bags. The way this production team is working to keep this show running, however, is blatantly irresponsible and putting their lives at risk. But it's okay because at least their taskmasters are making funny jokes about how hard it is to be a camera person, right?