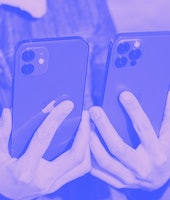 Within 14 days of its launch, the iPhone 12 became the best-selling 5G smartphone on the market, quickly surpassing offerings from competitors like Samsung and Huawei. Counterpoint Research reports that, despite only launching in the middle of October, the iPhone 12 and iPhone 12 Pro took the top two spots for sales that month.

That figure is duly staggering given that the iPhone wasn’t even released until October 23 in most countries — many of the month’s sales were pre-orders. The iPhone 12 and iPhone 12 Pro together accounted for nearly one-quarter of all smartphone sales for the month.

Every aspect of the iPhone 12’s launch cycle — from planning to production to launch date — has been impacted by the ongoing pandemic. Except for its awe-inspiring sales numbers, that is.

Another one for the record books — Apple’s product launches have topped the charts for decades now, and if you’d asked us a year ago, we’d have had no doubt the iPhone 12 would pull similar numbers. Then the COVID-19 pandemic hit, throwing even the most steadfast of institutions into disarray.

To expect anything other than top sales from Apple’s fan base, even during a pandemic, would be to understate its power. The iPhone 12 has sold well all over the world, despite record-setting unemployment rates and general economic collapse.

Still pushing 5G — Other than general hardware and software improvements, the variety of which we see every year now, Apple made the iPhone 12’s 5G connectivity its number-one talking point. At the iPhone 12 launch event in October, Apple even offered the stage to Hans Vestberg, chief executive of Verizon, to make lofty promises about the new phone’s download speeds.

In the United States, especially, Apple has been pushing the iPhone 12’s mmWave antenna, an innovative feature available in even the low-end iPhone 12 Mini. This antenna ostensibly allows the iPhone 12 to better connect to high-speed networks… but mmWave technology is notoriously spotty. Then again, 5G in most locations is still rarely much faster than 4G or LTE — so consumers are buying more into a promise of future connectivity than into a current high-speed reality.

Next-gen connectivity notwithstanding, there’s still plenty to love about the iPhone 12 lineup. At this point, it would take a severe misstep — or perhaps the extinction of the human race — for Apple’s future product launches to be met with anything other than spectacular sales.