Remembering Lou Ottens, the inventor of the audio cassette

“We were little boys who had fun playing. We didn’t feel like we were doing anything big. It was a kind of sport.” 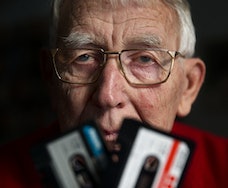 Dutch engineer and inventor of the audio cassette, Lou Ottens, has passed away at the age of 94, NPR reported yesterday. Ottens introduced the much-loved compact cassette tape in 1963 and played a major role in the development of compact discs (CDs) while he worked at Philips. His death was confirmed by the Amsterdam-based media outlet NRC Handelsblad.

Although cassettes are no longer as ubiquitous as they were back in the day, particularly during the 1970s and 1980s, they still carry a nostalgic appeal for many today, especially when it comes to mixtapes (even virtual ones). In a 2016 documentary called Cassette: A Documentary Mixtape, even Ottens sounds surprised by his invention's popularity as he notes, "We expected that it would be a success but not a revolution."

The Guardian points out that Ottens also expressed modesty about his deep interest in technology and engineering. When he was a teenager, he built a radio to listen to Radio Orange with a directional antenna that could thwart jammers deployed by Germany at the time. Despite having radically changed the world of music with cassettes and CDs, Ottens described his contribution in humble words: “We were little boys who had fun playing. We didn’t feel like we were doing anything big. It was a kind of sport.”

Genius born out of irritation — Ottens, who was born in 1926 and was said to be always curious about technology since his young years, had his fair share of skeptics when he first released the cassette in the 1960s. As NRC Handelsblad notes, his idea for the cassette was actually conceived out of annoyance at the clumsy tape recorder, seeking something he said should fit right into your pocket.

“The cassette tape was invented out of irritation about the existing tape recorder, it's that simple,” Ottens told the outlet.

People initially doubted the cassette would be a trustworthy product, often complaining about having to use pencils to tighten the tape up. But Ottens’ creation, which was originally called “the compact cassette,'' became a powerhouse of an item for music sales worldwide. It was such a hit that substandard, knockoff cassettes were sold in Japan during the initial hype. It was then that Ottens required Sony to agree to Philips' patented design as the standard for cassettes.

Ottens' legacy shows that he wanted music to be accessible and affordable; NPR notes that he supported the concept of licensing the cassette standard to other companies, allowing them to participate in its success. The only professional regret Ottens had, according to Guardian, was witnessing Sony, not Philips, beat the walkman game and present its own as the first contender.

“It still hurts that we didn’t have one,” Ottens said.