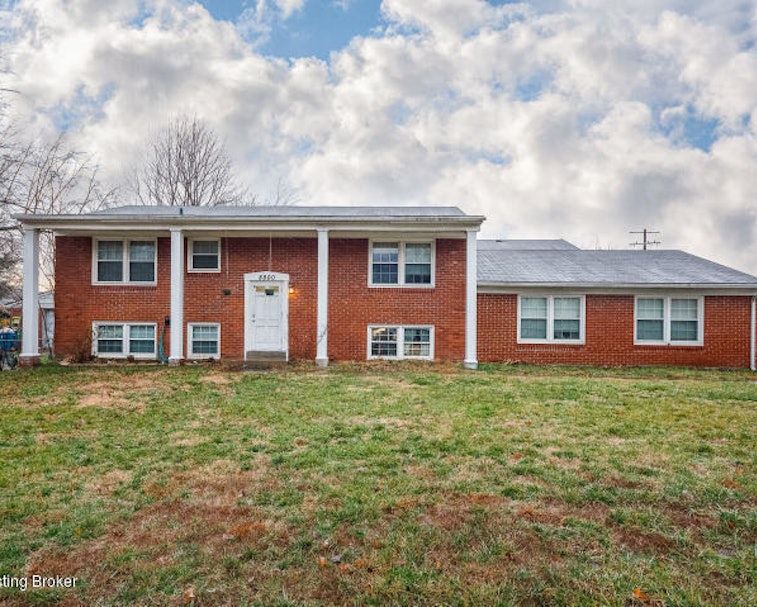 Earlier this week, stories of a certain house listed for sale on the realty website, Redfin, began circulating on social media: A three-bedroom, four-bathroom, 3,100 square-foot residence with an asking price of $375,000 located in Louisville, Kentucky. Apart from the unfortunately named Blue Lick Road on which the home sits, nothing else initially appeared amiss about the location. Until you virtually toured the building. Now, at least one of the many mysteries of the house has been solved: just who's been living in the damn thing all this time. But figuring out the background to Blue Lick Road doesn't erase some of the creepiest aspects of the entire viral experience.

Starts weird, and just gets far weirder— From the first available image on the tour, it's clear something is not quite right about 8800 Blue Lick Road. The living room, such as it is, is a dusty, dingy mess. Broken pieces of what might be shelving are strewn across the floor, next to half-empty bins of kitty litter. The kitchen doesn't fare much better, even after the briefest of examinations. And then, well, there's no way around it, things just start getting really weird.

Yes, that does appear to be a shelf dedicated solely to a creepy-ass Halloween scarecrow tchotchke underneath some cloyingly sweet Thanksgiving figurines. And what's with the retail store exit sign near the stovetop? Anyway, it doesn't take long before the online tour literally goes downhill, as we descend into some kind of labyrinthine storage facility crammed full with all manner of overstock media, books, magazines, dolls, food supplies, more exit signs, and God knows what else. The Auction House of Leaves seems to have no end, and online sleuths soon found themselves spending literally hours mapping out the shelves, corridors, and spooky dead ends. And then, the batshit coup de grâce:

Bathroom of the damned— Here, in the belly of the beast, we come across a sizeable back catalog of Girls Gone Wild DVDs next door to one of the most unpleasant-looking shower situations to ever grace a realtor listing. There's just so much wrong with it, from the stairs to nowhere, to the small leopard print mat, to the plastic gas station to-go cup perched in the left corner.

The more time we spend looking for answers in 8800 Blue Lick Road, the more questions it prompts. Thankfully, a blogger named Andy Baio managed to get in touch with the property owner yesterday to find out just what the hell's going on with their listing. As it turns out, the home itself "was originally a church and a Christian school, with the small house first built in the 1950s, and two larger structures added in the 1970s," Baio explains.

The owner, Troy Curtis, not only lived there, but used the spot to also keep the inventory for his bulk resale business (hence things like the 100's of copies of Bloodrayne). In 2014, Curtis ran afoul of the law and got raided under RICO organized crime charges for the sale of stolen goods. By Curtis's account, he had no idea he and his family were trafficking in fenced items. Nonetheless, he's currently wrapping up a seven-year probation sentence, and while his business is banned from Amazon, he is still running a similar operation via eBay.

A meta-horror in the making— The Louisville listing is quite the digital found object, and seasonally very appropriate given its mysteries and kookiness, so the original tweet's virality is unsurprising. But the most unsettling aspect of the House on Blue Lick Road isn't its caverns of fluorescent-lit bulk-buys, or its relative squalor, or the implication that something just as strange could be lurking within the walls of our neighbors' houses — it's our ability to collectively judge these living spaces from the safely of our own, unexamined confines.

There's an invasiveness to VR realty listings like the one for 8800 Blue Lick. With them, we reduce lives — and livelihoods — to a string of timed, 360-degree snapshots. This isn't to imply the random assortment of tattered Barbie Dolls aren't terrifying, because of course they are. But the images of a mirror-reflected, soulless tripod camera can be just as off-putting as the barren baptismal bathroom it's capturing, or even the entire complex rendered into a digital "dollhouse."

The House on 8800 Blue Lick Road is a 360-degree uncanny valley of perspectives, an amalgamation of products, time, deterioration, and voyeurism. In a time when so many of us are still largely confined to our own homes, maybe the escapism is necessary. But in an era of Ring security systems, Alexa-enabled smart homes, and Zoom office spaces, it's only a matter of time before more 8800 Blue Lick Road's will be found and dissected. Here's hoping your house isn't among them.