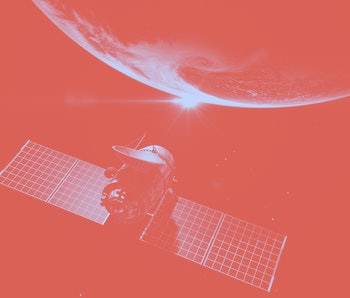 The FCC has a soft spot for SpaceX. Recently, it granted the company license to launch at least 12,000 satellites in the near future. It's a staggering increase compared to the current 1,500 satellites above our heads. Similar projects like Amazon’s Kuiper are also under the agency's review.

For these companies, satellite constellations are business ventures. But for stargazers and environmental scholars, this influx of satellites poses serious risks for the night skies given the amount of artificial light in the Earth's orbit. They worry these projects could change our view and understanding of the cosmos completely. According to Scientific American, a soon-to-be-published paper in The Vanderbilt Journal of Entertainment and Technology Law argues if FCC does not evaluate its satellite licensing's effect on the environment, it could be sued in court — and it very well could lose.

Enter NEPA — The National Environmental Policy Act (NEPA for short), enacted in 1970, requires federal agencies to accurately evaluate and report their projects' impact on our environment.

While agencies can use "categorical exclusions" as a loophole to keep running environmentally dangerous projects, this won't work for the FCC, researchers say. Although the agency remains adamant that the satellite constellation doesn't change how the night sky looks, researchers state that the agency is wrong.

"The FCC has never performed a study showing why commercial satellites deserved to be classified as categorically excluded from review," the paper's author Ramon Ryan told The Scientific American. "And the evidence shows that these satellites are having an environmental impact. If the FCC were sued over its noncompliance with NEPA, it would likely lose." The impact Ryan refers to includes astronomers' ability to study our skies.

What should FCC do? — This legal kerfuffle can be avoided, according to Ryan, if FCC simply looks to NASA's standard of assessing satellites and how they may affect the Earth's firmament with numerous and intense beams of light, thereby obscuring our view of the skies.

Economic growth and environmental stability are not mutually exclusive if federal agencies sincerely put their minds to it. But if the FCC still sides with mega satellite constellations over environmental concerns, it should prepare itself for an intense and lengthy battle that could drag on for years in federal court.