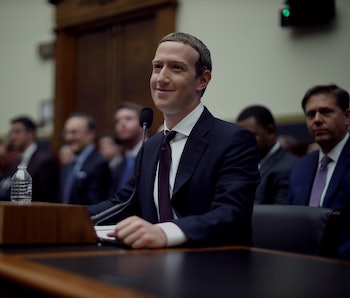 After it received massive backlash during the 2016 presidential election, Facebook tried to repair the reputational damage and ire it brought upon itself for its social network management policies. There was much talk of transparency and vows to bring on independent analysts who would, the public was told, inspect and encourage accuracy on the social network, how it handles posts, its regard for safety and free speech, and its management of political ads. It's been a shaky endeavor as Facebook continues to struggle with the most basic tasks like rooting out platform pseudoscience in the middle of a pandemic, for instance.

Now, according to Wired, the social network has announced the 20 members of a Facebook Oversight Board and plans to add another 20 in the future. Although the outlet reports that these board members have the power to "overrule" Mark Zuckerberg, it's a little more complicated than that.

Who's on the team? — The board touts some big names. It includes the former prime minister of Denmark, a former federal judge, law professors, a media editor who greenlit Edward Snowden's explosive leak, just to name a few. Hailing from Europe, sub-Saharan Africa, the Middle East, North Africa, Latin America, Central and South Asia, North America, and Asia Pacific, these board members are expected to present not only regional diversity and the complexities that come with it but also linguistic and scholarly variety and breadth of opinion. In essence, they're expected to examine the content management, flow, and ethics on a network used by at least 3 billion people. In total, it's a board comprising experts from 27 countries who speak 29 different languages.

But how much power do they have, really? — While it is true that board members can "overrule" Zuckerberg when it comes to individual post removal, they do not have complete power over the CEO. They cannot — and this is crucial to mention — change any content policies. So at the end of the day, Zuckerberg is very much in power and has complete and lone say over how Facebook's system works. Which has been the problem all along. We're not trying to downplay the board's value, but compared to the power Zuckerberg wields, it seems like a cosmetic change at best, and little more than lip service and window dressing.

A "huge step" for the world — The board's members still sound hopeful about their involvement in managing content uploads and removals on Facebook. "There is a downside to social media, social media can spread speech that is hateful, deceitful, and harmful," former Danish prime minister Helle Thorning-Schmidt, said in an interview with Wired. "And until now, some of the most difficult decisions around content have been made by Facebook, and you could say ultimately by Mark Zuckerberg. That’s why I feel that this is a huge step for the global community that Facebook has decided to change that."

Limitations to power aside, it's still a positive step to include impartial experts who don't have to answer to Zuckerberg — or the Facebook board — at all times. It won't fix the rot in Facebook, but it's a start. However, without a change to the voting shares Zuckerberg holds, the buck will always, ultimately, stop with him. And that's no way to ensure accountability or encourage the sort of circumspection that could fix Facebook's intrinsic failings.