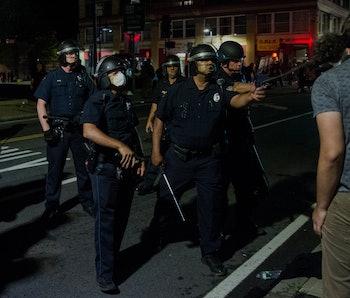 The Drug Enforcement Agency (DEA) has been granted special emergency authority to take action on matters not related to drugs in the wake of continued protests over the murder of George Floyd, according to a copy of an internal memorandum obtained by BuzzFeed News. The temporary increase in the DEA’s purview has been granted across the U.S. for a period of 14 days beginning on June 1.

Usually, the DEA’s ability to take action is limited to drug-related activities. But the DEA’s new powers are far-reaching and purposefully abstract. According to the memo, DEA agents will be allowed to:

As law enforcement agencies continue to look for any and all excuses to search personal property, it’s more important than ever to take control of your personal digital security. Because of the vague nature of this memo, though, it’s important to remember that even the most secure communications can be intercepted.

Batten down the hatches — The law is messy when it comes to digital privacy; that means your private data might not be as protected as you assume it to be. That one call or text about organizing a protest could now allow more government agencies than usual to trace out your whole friend group.

Buy a burner phone, or at the very least pay cash for a new SIM card (the U.S. is one of the few countries where this is legal). Encrypt your phone, and encrypt the SD card, too, if you’re an Android user. Take advantage of chat apps with built-in end-to-end encryption, such as Keybase and Signal. Scrub your photos of all metadata and blur or blackout visible faces to protect your fellow protesters’ anonymity. Turn off location services and biometric unlocking systems such as fingerprint and Face ID, if possible, so your phone can’t be unlocked without your permission.

The path of least risk is to stay off your phone completely; leave it at home, if you can.

Troubling, to say the least — Three DEA sources spoke to BuzzFeed News on the basis of anonymity. All said they’re troubled by the memo and its implications. They see it as an example of the Justice Department “potentially abusing its power in an attempt to smear the protests and crack down on protected First Amendment activity.”

The implications of the DEA’s new power are yet to be seen, but it’s obvious that the federal government is looking for any and all resources it can put to use in fighting escalating protests over the murder of George Floyd. Because of our bare-minimum data privacy laws, you need to look out for your own privacy. If all else fails, there are many ways you can carry out protests from home.

You can read the full memo text here.