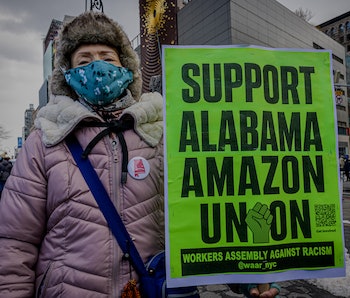 By this point, you’ve probably seen one of a few posters going around Instagram for a boycott of Amazon’s goods and services spanning the next week. “Don’t cross this virtual picket line,” one reads. The boycott calls upon the internet to stay off Amazon from March 7 to March 14 in solidarity with the unionization efforts at Amazon’s facility in Bessemer, Alabama.

But this #BoycottAmazon movement was not started by Amazon union members. The still-forming union is not associated with this week’s boycott at all — a fact its organizers should really be making more clear in its advertisements.

We’re all for becoming less reliant on Amazon, a company that has profited majorly off the COVID-19 pandemic while treating its workers with very little kindness. In the effort of supporting the company’s unionizing workers, though, boycotts from unofficial sources can actually do more harm than good.

Unionization is a tricky business — Despite being one of the largest and most-profitable companies in the world, Amazon's employees are not represented by a union of any sort. The tech industry as a whole is notoriously unfriendly to unionization efforts, and Amazon is perhaps the worst of them, frequently resorting to underhanded tactics like spying on pro-union workers and sending explicitly anti-union propaganda mail to would-be union members.

For the average consumer reading these headlines, a week-long boycott may seem like an obvious next step towards a successful Amazon union. But boycotts, in the larger context of unionization, are not spur-of-the-moment affairs. They’re a calculated form of escalation that unions only resort to if they believe doing so is in their best interest.

Right now, the Bessemer union is working on securing a majority vote and winning its first election. A consumer-led boycott — especially one that is not forthcoming about its lack of union ties — brings with it the high potential of mixing and obscuring the union’s messaging.

In the worst of cases, it could even unintentionally convince potential union members to vote no if they believe the boycott is being led by the union.

To boycott or not to boycott? — The question, then, is whether or not staying away from Amazon properties this week is actually supportive of Amazon’s Alabama union. There is not a clear-cut answer, as you may have gleaned if you’ve read this far.

The easiest answer is that it’s never a bad time to cut back on your reliance on Amazon’s services. The company has had an incredibly profitable year; your money would indeed be better spent supporting small businesses, if possible.

It’s also best to stop sharing boycott graphics on Instagram and other social media without context. Unionization is finicky; there is a fine line between supporting workers and tearing down the company they work for.