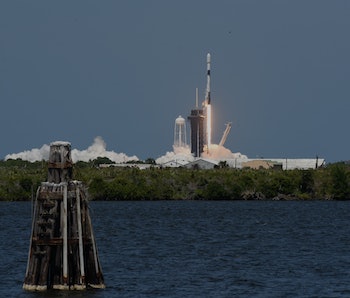 Cops are reportedly looking for a YouTuber who snuck into SpaceX’s Texas launch site to film a rocket launch. Caesar Galaviz broke into the Boca Chica SpaceX launch site in late March ahead of the launch of the company’s SN11 Starship rocket — and now there’s a warrant out for his arrest.

Sheriff Eric Garza of Cameron County tweeted about Galaviz Monday morning, along with a graphic calling him a “wanted fugitive.” The warrant says Galaviz was last seen in Conroe, Texas.

After sneaking onto the launch site, Galaviz filmed himself walking around the massive rocket prototype and the area surrounding it. He uploaded — and pretty quickly deleted — the video to his YouTube channel, Loco VlogS, according to Insider.

If you’re going to go around doing cool things that happen to break the law, you probably shouldn’t upload them to YouTube (as a number of insurrectionists learned in the wake of January 6). But there’s a lesson here for SpaceX, too: put some of your resources toward keeping the public safe.

Already apologetic — Galaviz was certainly boastful as he meandered around SpaceX’s launch site, but he seems to have realized his mistake quite quickly. He deleted the original video not long after uploading it, and The Verge reported that it had racked up 100 dislikes and a mass of comments from angry SpaceX fans before being deleted. But of course another account archived the vlog, later posting it as an unlisted video.

In classic YouTuber fashion, Galaviz uploaded a two-minute apology video on April 1. “I just want to say sorry to everybody… yes, it was wrong, yes it was illegal, but in my eyes, in that moment, I never really thought about that,” Galaviz says in the video. “What went through my mind was ‘Okay, I’m never going to get this opportunity again.’ So I went for it.”

Step up the security, Elon — Though Galaviz was obviously trespassing — and brash enough about it to post the escapade online — he’s by no means the only one at fault here. Being on the forefront of scientific innovation comes with the responsibility of keeping the general public safe from your experiments. By failing to secure its launch pad, complete with a fully operational rocket, SpaceX is culpable here, too.

This isn’t the first time someone’s wandered into SpaceX’s private territory, either. Back in 2019 a SpaceX fan took selfies with a Starhopper prototype and ended up behind bars hours later. Apparently, SpaceX didn’t think that was reason enough to buff up its launch pad security, though.