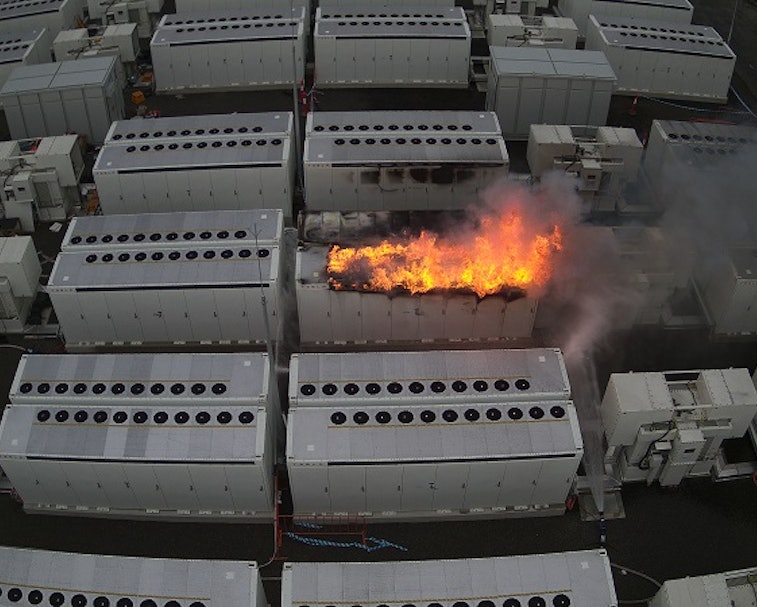 Tesla might be best known for selling electric cars, but the company is also very talented at sowing the seeds of chaos around the world. Here’s a perfect example: A Tesla battery project in Victoria, Australia, caught fire on Friday morning and proceeded to burn for the entire weekend. Only on Monday afternoon (Victoria time, that is) were fire crews able to get the blaze under control.

The enormous set of batteries is comprised of Telsa Megapacks. It’s a powerful array meant to alleviate strain on Victoria’s power grid, which has struggled in recent summers and caused sustained blackouts across the area. French renewable company Neoen has been working on building it since late 2020.

But, uh, one of the Megapacks caught fire... while it was being set up. It didn’t even have the chance to complete its long-awaited job. And then that pack set fire to a second Megapack… and you can’t exactly just throw a bucket of water on them and hope for the best. Officials say there was no risk of the fire spreading to surrounding areas, but the fire doesn’t exactly bode well for the Megapack’s future.

Big big big — The “Victorian Big Battery” is one of the largest such arrays in the world, with an area about as large as a football stadium and the ability to hold 300MW of power. Neoen says that’s enough to power a million homes in the area for half an hour. That much power would — hopefully — alleviate some of the stress on Victoria’s power grid.

The Megapacks are also a major factor in Victoria’s plan for a greener future. The state hopes to get half its electricity from renewable sources by 2030; the battery packs would provide necessary backup for when sources like wind or solar aren’t readily available.

But… it caught fire — The elephant in the room is on fire. Not the kind of fire you want to stand next to and roast marshmallows around, either; we’re talking massive, three-days-straight can’t-be-put-out-with-water fire. The fire didn’t hurt anyone but it could’ve, in less ideal circumstances. The government did end up having to put out a toxic smoke warning about it, too.

The reason for the battery’s spontaneous combustion is as of yet unknown, at least to the public, but the cause is less important than the fact of the fire, right now. This is the first time one of the packs has caught fire that we know of — but even once is too much. The Megapacks, which have been deployed in other areas like California, too, aren’t of much use if there’s a chance they’ll burst into flame, you know?

Tesla has said that it’s currently producing Megapacks at a slight loss because they’re so expensive to produce. Unless the company can come up with a good reason for the general public to trust these batteries again, you can bet those margins won’t be improving any time soon.