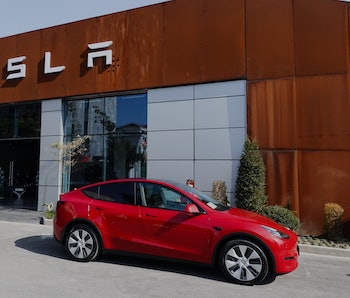 The promised moment has arrived: Tesla is ready to accept payments in bitcoin. CEO Elon Musk tweeted early this morning — in a very simple manner, especially by his terms — to make the announcement.

The Tesla website now presents users with an option to pay with cryptocurrency rather than a credit card when checking out. Right now the option is only available for purchases within the United States; Musk clarified in another tweet that paying by bitcoin will be available outside the U.S. “later this year.”

The price of bitcoin surged following Musk’s announcement, rallying from just under $54,000 to $57,000 in a few hours’ time.

Tesla is far from the first company to accept direct bitcoin payments, but it is one of the largest. Musk has been loud in his public support for cryptocurrency in the recent past, and Tesla purchased approximately $1.5 billion in bitcoin earlier this year.

All in the family — Opening Tesla’s business to cryptocurrency transactions is simple on its surface. You’d think all it takes is adding some code to the Tesla website to adapt to crypto wallets. The reality is much less effortless. Traditional payment processing can’t accept cryptocurrency, which often leaves companies to rely on third-party services like BitPay to process crypto payments.

Musk says Tesla has decided to take the first-party route. This requires Tesla to maintain and operate its own internal crypto-processing nodes — which, as you might expect, is not for the faint of heart.

What about the energy? — Cryptocurrency is buzzy as all hell this year. Bitcoin is really only the tip of the iceberg; the mania surrounding NFT art is pushing cryptocurrency into the mainstream consciousness, too. It’s difficult to ignore a craze that’s turning digital art into sales in the tens of millions of dollars.

Some Twitter users are responding to Musk’s tweets wondering whether or not accepting cryptocurrency runs against Tesla’s mission of powering the world with clean energy. While it’s true that mining bitcoin requires large amounts of energy, the actual environmental cost of that energy is very much up for debate. The short answer: the math can be misleading, and we don’t have enough information yet.

Tesla joins the likes of AT&T, Microsoft, and BMW in accepting direct bitcoin payments. Mainstream adoption seems all but imminent.

Disclosure: The author of this article holds a small amount of bitcoin.