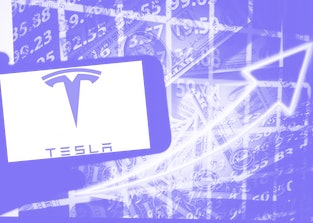 Tesla’s shares skyrocketed today, pushing past the $100 billion mark. This puts Tesla’s value at more than that of Ford and General Motors combined. It’s the first car company to pass $100 billion in market valuation.

Tesla isn’t stopping any time soon — Unless some misfortune of cosmic proportions falls upon Tesla, this is by no means a peak for the company. Tesla’s climb in value means the company will be able to hire more talent and invest even more resources in developing the innovation for which it’s quickly become known and loved.

And Elon is getting richer — The valuation also means Elon Musk will be making more money than ever before — and he’s sure to put that money toward some mind-boggling projects. As Reuters notes, Musk will also be able to purchase a new tranche of Tesla stock if the company can average above $100 billion for a six-month period.

Hopefully Tesla can keep up with demands — Consumer demands in new markets like China are sending Tesla production into overdrive. Tesla’s Shanghai factory is pumping out 1,000 cars per week right now, but Musk hopes that number will be more like 500,000 cars per year soon. That’s 50 times as much production as the factory is doing right now.