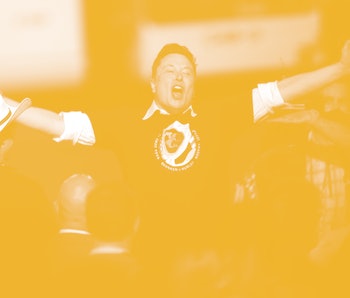 Tesla has officially surpassed Toyota as the world’s most valuable automaker, Bloomberg reports. It’s the first time — by far — that an alternative-fuel automotive company has dominated the industry.

The price of Tesla’s shares rose by 3.5 percent in intraday trading today, sending the company’s total market cap up to $207.2 billion. The company’s shares have more than doubled in value since the beginning of the year. Toyota, in comparison, has seen a fairly steady year thus far and currently has a market capitalization of $201.9 billion.

Tesla, led by self-professed meme dad Elon Musk, has gotten to this point by consistently shirking industry standards and using often-ruthless business practices to achieve its massive success. There’s no debating that Musk and his company have radically altered the future of the automotive industry — but it leaves many wondering whether it was worth stepping on the backs of the company’s workers to get there.

Toyota is still king of production — Though Tesla’s net worth has skyrocketed, Toyota is still outproducing it by a landslide. Musk’s company, with only a few main factories, can’t even hope to compete in that arena right now.

Tesla produced about 103,000 vehicles in the first quarter of the year, while Toyota made almost 2.4 million vehicles during the same period. That means Toyota produced more than 23 cars for every one vehicle made by Tesla.

Musk does whatever he wants — Elon Musk doesn’t try to hide his questionable business practices. In fact, he’s proud of them and is more than willing to flaunt them at every turn. That makes it impressively easy to follow the path of destruction in his wake.

Musk’s penchant for ruthless business has never been more clear than it is now. He’s repeatedly put his factory workers in danger to keep business smooth and profits high.

As the COVID-19 pandemic progressed across the United States, Musk worked relentlessly to keep Tesla’s factories operating, despite the government’s continued advice to shut down. When he grew impatient with the government’s continued forced shutdown of Tesla factories, Musk defied orders and re-opened them anyway. Surprising no one, Tesla factory workers have now been testing positive for the novel coronavirus.

Tesla’s zero-emissions vehicles have made an enormous impact on the auto industry. That much is clear from immense investor interest and the company’s rapid expansion. The company’s new industry dominance is a good sign for a sustainable future — but the world would be remiss to not discuss the collateral of that success, which most often fails the company’s lower-ranking workers.