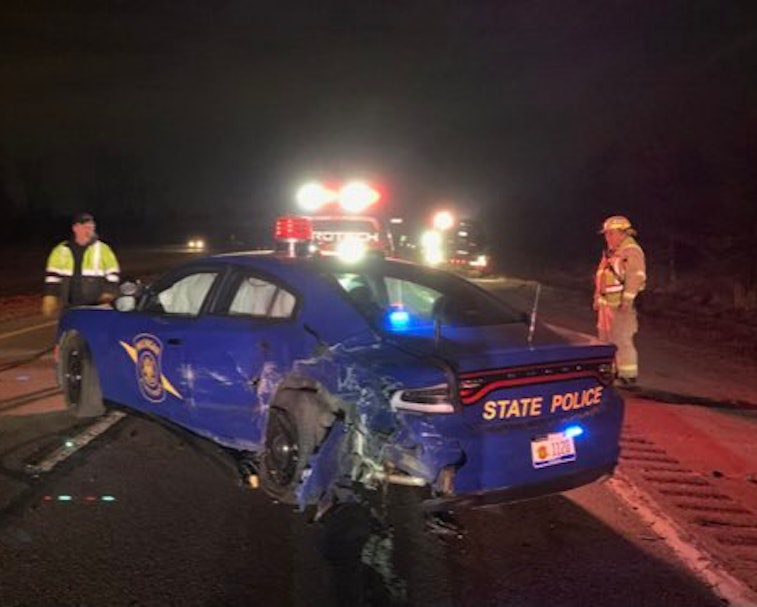 It’s not every day Elon Musk’s man-child empire literally collides with the U.S. police state. But late last night, a Tesla Model Y with its controversial Autopilot feature engaged collided with a Michigan cop car. The officer was standing outside his cruiser and investigating a nearby separate collision when the Tesla struck his parked vehicle, which was slightly straddling the highway’s right lane and shoulder. Don’t worry, no one was injured, so we can all enjoy this bit of Schadenfreude completely (well, relatively) free of guilt.

Tesla’s (semi)autopilot features — As reported by CNBC, the accident occurred at approximately 1:12 a.m. as a Michigan police officer was handling a completely different collision involving a deer. While everyone made it out alright, the Model Y’s 22-year-old driver apparently “was issued citations for failure to move over and driving with a suspended license.” Tesla’s Autopilot driving assistance feature is now a standard inclusion across its newer vehicles, although the name is slightly misleading at face-value, as drivers are still required to maintain “active driver supervision” at all times.

Far from the first time — Last night’s accident is only the latest in a lengthy list involving Autopilot-enabled Teslas, including a similar incident with a cop car from a couple years back. While some of these accidents avoided serious injuries and fatalities, that unfortunately hasn’t always been the case. Walter Huang, an Apple engineer, was killed in a crash after complaining about his Tesla’s Autopilot malfunctioning back in 2018, and the aforementioned CNBC piece also notes multiple other similar deadly occurrences in recent years.

In the case of Huang’s death, the National Transportation Safety Board (NTSB) eventually concluded Musk’s company was at least partially to blame in the collision, although it appeared Huang didn’t fully adhere to the recommended Autopilot procedures

No signs of pulling the brake anytime soon — Autopilot’s questionable safety record doesn’t seem to be stopping Tesla’s plans to continue expanding the feature for the future. The company is still reportedly pushing ahead with testing out a fully automated version, and even recently unveiled the footage video of its self-driving semi-truck prototype cruising around a closed course. Thankfully, the EV market is no longer solely Tesla’s domain, and multiple competitors are offering up attractive alternatives to challenge the Technoking’s reign. Here’s hoping their autodrive features, if included, will be better tested and regulated than what Musk seems to feel is appropriate. Of course, right now that’s a pretty low bar from the looks of things.