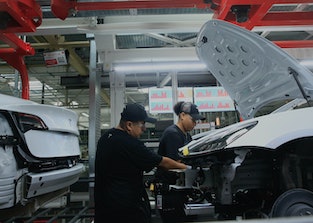 The amount Tesla has been ordered to pay over alleged racial harassment at its Fremont, California factory.

Tesla has been ordered to pay $137 million to a former contractor at its Fremont, California factory in a racial abuse lawsuit. The automaker is expected to appeal, and following the verdict published a blog post defending itself.

The lawsuit was filed by Owen Diaz, who worked at the factory for a nine-month period between 2015 and 2016. He worked as an elevator operator employed by a contract staffing company.

High school culture — In the suit, Diaz alleges that he was subject to “daily racial epithets,” and even saw racist graffiti in the bathrooms, which Tesla admits was reported and removed by janitorial staff. That makes the environment sound more like a high school than a business — you don’t encounter graffiti very often in a place of work.

Diaz, who is Black, isn’t the only person of color who has filed a complaint against Tesla. Reporting finds that, in fact, more than a hundred former and current employees say they’ve faced racism at Tesla, including repeated use of the n-word.

Weeks ago, in a separate case, Tesla was ordered to pay $1 million to Melvin Berry, a former employee who claimed that the company failed to stop his supervisors from calling him the n-word. He also alleges that after he complained, he was forced by his supervisor to work longer hours.

Appeal expected — The massive $137 million settlement is eye-popping, but these types of judgments are meant to be punitive enough that they force a company to take substantial action. Tesla, for its part, says that it’s improved its culture over the five years since Diaz worked at the company. But the company’s workforce isn’t unionized, meaning they don’t have as much bargaining power or leverage to actually push for changes they want. Unions would cost Tesla more money because it’d have to provide certain benefits and protections to workers, but in a sense, not having a union may be costing Tesla more. Treating people poorly, and optimizing for low overheads, results in massive penalties like this one.

The blog post doesn’t specifically say whether Tesla will appeal the suit, but its strongly-worded defense and the scale of the judgment suggest the company will. “While we strongly believe that these facts don’t justify the verdict reached by the jury in San Francisco,” Tesla’s VP of People, Valerie Capers Workman writes, “we do recognize that in 2015 and 2016 we were not perfect. We’re still not perfect. But we have come a long way from five years ago.”

Thankfully for Tesla, even if it does have to pay up, it should be able to afford to do so. In a separate lawsuit, investors are asking that CEO Elon Musk be forced to return $9.4 billion in stock over the company’s controversial acquisition of solar energy company SolarCity, which plaintiffs claim Musk forced out of self-interest.